Wednesday started like most others up at 04:30am, coffee, say good bye to Donna as she leaves for the truck company, Go down to the computer and start reading what happened in other peoples lives that was more exciting than mine. Now it is waiting for Adam to get up so I can fix him breakfast and find out what he wants to do, The weather says Fair and 66 degrees today so I may suggest the train museum, all depends on how bad he wants to spend the day playing with his buddies behind us, They have a trampoline, and then there is always bike riding, and playing in the basement if its gets nasty. I’ll let him make the call.

My son Andy took Rigg’s for his one year old Vet appointment yesterday. Actually he is 1 year and three months, but this was the first chance to get him in since the weather started to warm up. The Vet said he is just beautiful, has excellent muscle and body development, She also said he will sire really good pups when he is another 6-8 months old. But the big news was since he is a large Lab he was able to get his 3 year rabies shot and his last puppy shots. So Rigg’s is now officially a big boy.

Boy was he ever proud of his new rabies tag, when he got home I took his new collar off and he really watched intently as I put the tag on the ring. He is really possessive of his collar and kept pushing my hands to put it back on, Then when I got it on he immediately ran through the house showing off his big boy tag.

I got a call from my boss telling me I had a trip on the bus to Alabama scheduled for this weekend. That’s all I know for now until he e-mails the orders, At least I am going south again hopefully away from any snow. Hey Tammy maybe next time it will be Mississippi.

Well that's about it for now ,Be safe out there. Sam & Donna. 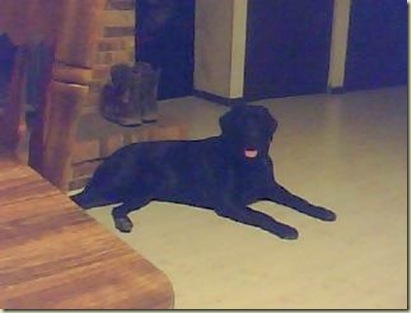 Posted by Sam&Donna Weibel at 6:58 AM