Well another morning and Sam & Donna hit the coffee  early today, Donna couldn’t sleep and was up before 04:00am ,She got off to the truck company at 05:30am and Sam went down to the computer, Adam came down about 07:00am and announced he was up for the day, Like you can’t hear the patter of six not so little feet running down the hallway with Rigg’s all excited that his buddy is finely awake. Not much planned today but it dawned clear and the temp is supposed to be 70 degrees today so I will try to get something done outside today, the temps are supposed to start back down tomorrow so make hay while the sun shines.Haven’t heard yet this week from the Bus company but it was slow last week and I was hoping for an overnight run this week. Here is a story from the past from Rigg’s
He also wants you to see his newest picture. 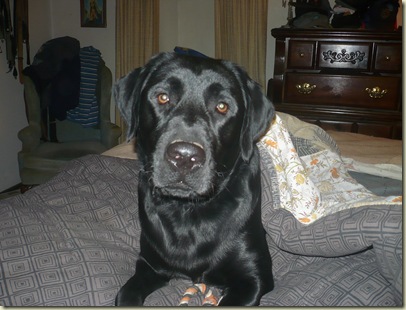 Such an innocent face,maybe it should be a mugshot.
Mom, I'm not a brat, I'm just adventurous and mischievous
You know I can't tell time , 300 in the morning so.  Yeah , I know I probably should have played
with Duckey, or my bone, or my rope, or the beheaded Kittykat...but they don’t get your attention.
And you were IGNORING me....just sitting with your coffee, wrapped up in your robe and watching TV.
Now why couldn’t I keep the goggles, you know I might need them, some of things I chew could get in my eyes?
And no I don’t think I looked ridiculous running around with deer antlers sticking straight on in front of me ( and I really
didn't mean to run into Zep with them, sorry Zep).....after all what did you want me to do with them balance them on top
of my head....I'm no deer I cant do that.
Now as far as the box of Christmas cards...you know its never too early to start planning.
And about the measuring spoons, I can explain ( I just cant think of it now )
The spatula ??  Didn’t you want breakfast ?
You know if you are going to put something on top of the hamper so I cant open the lid it really should be
heavier than an empty basket.
Yeah, I know there was more, but I'm tired now and going to take a nap, I was up early.
also, Mom you have to remember the doctor said you were to have more exercise, so actually I'm just helping
with your cardio workout.
Love
Riggins
Before I forget I want to welcome Al & Kelly from The Bayfield Bunch, and also Wandering Willy or Bill. Both signed on as followers. I have been following Al &  Kelly for about a year and I have learned a great deal from both of them I have always enjoyed photography and since changing from  35mm to digital it is like starting out again. Al is the one who directed me to Picasso 3 and I thank him for that. Willy was discovered as he was starting his Mexico trip I enjoyed all his adventures, even some of the ones I’m sure he would rather forget.
Most of my photography and videography has been train related in the past, I’m not giving that up but I may expand my horizons once we start traveling.Well That"s about it for now. Be Safe out there. Sam & Donna….
Posted by Sam&Donna Weibel at 7:32 AM