Well we held out and no snow in Dardenne Prairie this morning, We heard from Kenny and Angela in KC and they said they had 3-4 inches, we are a little over 200 miles east on I-70 and it was cloudy and in the 40’s most of the day with a little rain in the evening. I think we all have had our fill of winter this year, all except for those lucky Canadians who went to California this year. Anyway I posted some pictures yesterday of my truck or tow vehicle if that’s what it’s called and went into a blurb about the hard cover I put on and then wouldn’t you know it I found the pictures I wanted originally about an hour after the blog was published, so here they are. 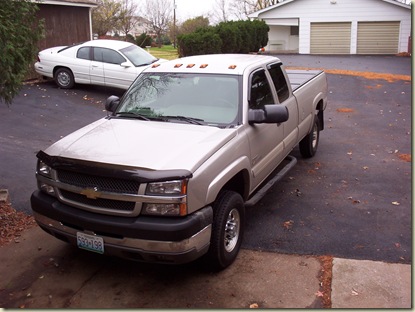 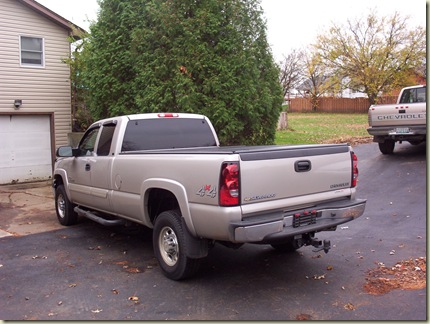 As you can see it is in four folding sections and does a good job of keeping everything dry when it is down. It has a lock on the front compartment and one on the rear. The other thing I just remembered I did and it was ridiculously cheap was I put a torsion bar on the rear tailgate, it was about $15US and only required two holes being drilled, but you do need two people to lift the tailgate back into position. You can open the gate with little or no effort like an SUV rear door. That is my old truck in the background, it was a short bed ext cab, with the smaller diesel. The newer one is a long bed with the duramax/allison combination and is like night and day over the old one. Even though it is longer to maneuver I like the longer bed, no worries about cab interference, and it seems to ride better while towing.

Rigg’s had another typical day I’ll let him tell you about it.

Boy Dad chased me and chased me to get the red thing from me....its a what ?...an inhaler? but Mom I see u put it in your

mouth and its okay.....Its what ..medicine...yuck I don't like medicine....what did Dad mean when he said Walgreens isn't going

to believe this again.

I guess Andy snitched on me...well, he was in that thing that gets you all wet and Dad was downstairs and your bed looked comfy.

And I have short hair so I do get cold, and I always see you and Dad pull the blanket up over you...Guess I really conked out, I

didn't even hear Andy until he came over tapped me !....boy I was having such a good dream and he almost scared me to death, that

Yeah I took that thing from shower floor, but Andy's the one that didn't hang it up....it really didn't taste very good...too soapy tasting.

Oh, it's suppose to taste like soap because its a shower sponge?

I really didn't mean to keep waking you up but I wanted to play and you had the gate up and you were ignoring me, that's why

I kept getting toys and throwing them over the gate....I thought you might want to play too and throw them back to me.

Well, that’s it for today, be safe out there, Sam & Donna

Posted by Sam&Donna Weibel at 2:22 PM