Well here it is Monday again, the kid's all went home, yesterday morning Nicole & Chris joined Adam. They had the whole day until 04:00PM to play and then I took Adam home, got as far as midway between Wentzville and Forestell and traffic came to a stop, after sitting in one place for 40 minutes I called Adam's Mom and told her we were stuck and I would appreciate it if she would come east and meet me at the McDonalds at Wright City as I didn't know where the wreck was but we were barely moving and then would stop so I was going to get off at Forestell and take the service road to Wright City. What normally is an hour round trip ended up being a two hour trip.

Once I got home Donna was home from the restaurant and the Super Bowl was starting in the family room, Samantha had made some Horsey D Overs. So they all watched and munched in there. 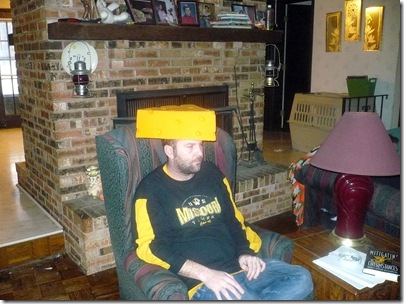 Guess who my Son Andy is rooting for.

I was rooting for Green Bay also, even though I am a PA native, when I was a kid I thought it was the Green Bay Packards. Remember the Packard what a car, better than a Cadillac, and a back seat that was bigger than a hotel sofa. Trust me, my buddy had a 48 Packard. Anyway it was a shock later to find out that no the team wasn't named after such a fine motorcar.

I want to take a minute and wish JOHN & ELLIE SOUVA 's, Daughter Kelly GOOD LUCK and GODSPEED, she is being sworn into the the US Navy today and will be leaving this afternoon for basic training. All of you bloggers out there that have had children leave for service to their country know this is a tough time for any parent. Both John & Ellie are Air Force veterans so they know full well what will be expected of Kelly. She is embarking on the adventure of a lifetime and we are all proud of her and all the other young people serving our country. Our Prayers are with all of of them, Please add her to your prayer lists.

DENNIS&DONNA, Up in Sandwich IL. got some more snow,and Donna is entering into the Maxine lookalike contest. We wish her luck, Donna I know you have an out fit that will snatch up the award.

How about a Sadie & Rigg's picture, as you know Sadie was spayed a few days ago and is still on limited duty, no excessive running etc. Rigg's has taken to being her shadow and it's like he knows, he won't let her play tug and just has her lay by him when they are allowed a few minutes free time together, what a big brother. If she is in her little cage he will lay with his nose next to hers. 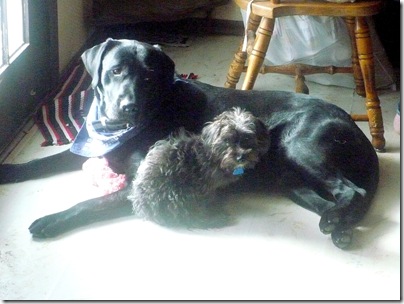 Donna just got home, the time just slipped by today, we are going to make some kind of Hamburger Helper type dish tonight a good hot stick to your ribs supper.

It is supposed to have a single digit night and then a high of 16 degrees tomorrow, Wednesday has snow in the forecast.

Glad to hear the temps are coming up for most of our friends that made it south or southwest.

Be safe out there. Sam & Donna.

Posted by Sam&Donna Weibel at 4:50 PM