We were up at 04:00AM got the coffee going and looked out and nothing had started yet. But Donna had the news on and they said the freezing rain and snow had reached Foristell Mo wich is just west of us and Jefferson City & Columbia already had several inches of freezing rain. The Weather Service had declared a Blizzard Emergency and than they flashed that Gov Nixon had declared an emergency and activated the National Guard, with all Engineer units to assist MoDot and the Infantry units to assist the State Patrol in Patrolling in 4 wheel drive vehicles. I guess Donna took them serious as she decided since she would lose her vacation she has built up on Mar 1st if she didn't take it she would stay home and maybe take another day tomorrow. This is the first time in 25 years she missed a day of work due to weather. In 1982 we had another blizzard with 27 inches of snow and she took off then. The City of St Louis and all the schools and Malls are closing. Right at 05:00AM it started to sleet very heavy,  about 09:00AM I took a picture of the ice that had fallen.. 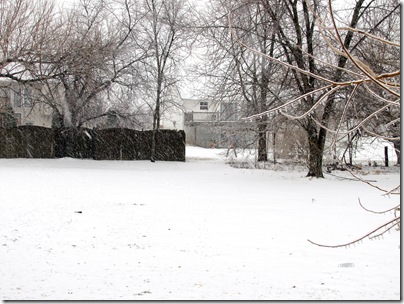 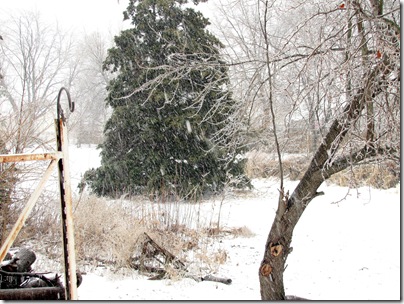 About noon the ice turned to snow and the wind picked up, Andy decided to take John Deere out and see if he could get the ice plowed, it was about 3 inches of icy snow by then and about 2 inches of hard ice under that, John could only push it about 8 feet at a time and then you had to back up and get a run at it with the blade turned to the side to move it off the road, for only having 29 horsepower John sounds like a freight train when he hits that ice. It looks like if we can get this initial coating plowed the rest were getting will be light and easier to plow. 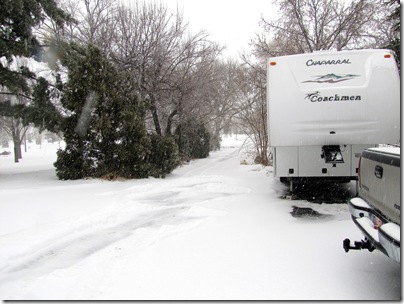 We are supposed to get about 5 more inches this afternoon and then 10-15 more overnight, I hope this is it for the winter 2010-11.

What does Rigg's think of all this. He doesn't like the ice as he slides on his butt and has to boot scoot when he goes across the patio to the grass. 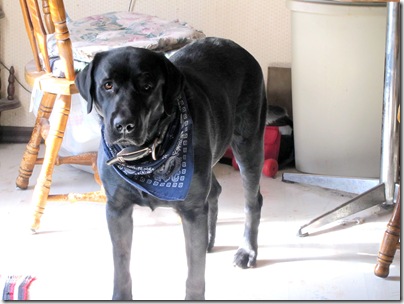 Rigg's is not a happy camper. 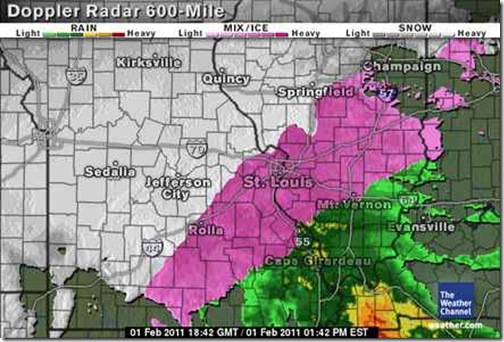 Weather Map just as the ice turned to snow.

As it moves east it looks like we have a lot of white stuff that is going to pass through our way. Dardenne Praire is right where the snow line is at I-70 in the picture.

Andy has spent most of the afternoon plowing and then getting warm and then he goes out again. It's great to be young, I will probably take the first shift at 04:30AM to try to get rid of whatever we get over night, knocking this first layer out is a godsend as the snow that we are getting now will be easier to push aside.

For all you guys in the warmer climes, just look at what you are missing, BOB,  up in Minnesota  will keep you informed as to what the snow picture is like up there.

Oh by the way remember the Star Spangled Banner, the line where they sing, "And Our Flag was still there", Well I got a telephoto of our flag wipping away in 40mph winds with the snow flying around it, if that don't warm your spirit nothing will. 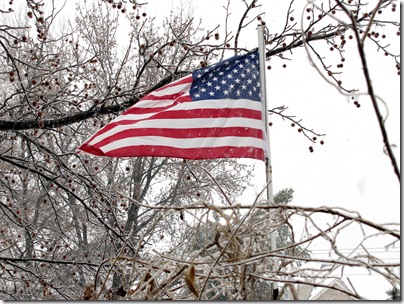 "Our Flag was Still There"

Our flag here at the Weeb Ranch has flown since a couple of days after we moved up here and my son who was a preteen at the time helped me put it in concrete, I flew a US Navy flag with it while my other son Tim was in Desert Storm and then gave him the flag when he came home. If you miss the Weeb Ln street sign at the end of the driveway you won't miss Our Flag proudly flying in front of the house.

I'll update the Blizzard report tomorrow with what ever we get tonight, it's nice and warm inside and a hot supper and a couple of cold ones will be enjoyed later tonight.

Posted by Sam&Donna Weibel at 3:40 PM