Well the Blizzard of Epic proportions that the news media around here touted is finally over. Yes it was, windy, and the ice storm part the worst, but it looks like we ended up with about 15 inches total here in Dardenne Prairie, Ice & Snow. One thing that might indicate how bad it really was, is for the first time in history I-70 was closed from O'Fallon MO. to Kansas City MO. That is over 200 miles of interstate highway, and a main east-west artery for the nations transport industry. Trucks were directed to shopping malls and other alternative parking areas by the police agencies involved and schools were converted to bunk rooms in St Peters Mo. for those without sleeper cabs.

Keeping John Deere going in shifts, proved to be the way to go, he went through a tank and a half of gas, it seems he uses fuel at a much greater rate when it's cold and he's plowing than when in the summer cutting dress. My Son Andy turned out to be a Godsend, he did the lion share of the plowing and was only to happy that he would be making money on the jobs he did for the neighbors, Our old neighbors were elderly and I never charged them to plow their drive, they were to old to drive, but they needed the drive done so they could have their kids bring groceries and help could get in if needed. After each storm I would get a call, and Donna would go over and Jean would have something she made for us in appreciation. When they died the new owner is running a business out of the place now, so my son charges him $40 each time he plows it, that's $40 for yesterday and $40 for today, Then he will go and do two car drives in the subdivisions for  $15-20 and he can make a nice wage each time we get a measureable snow fall. Kid's don't go out and shovel anymore so he is the only one a lot of older people have. 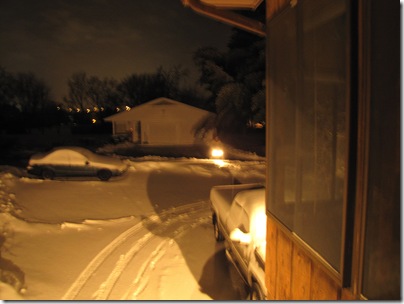 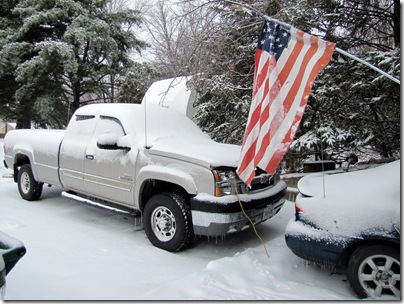 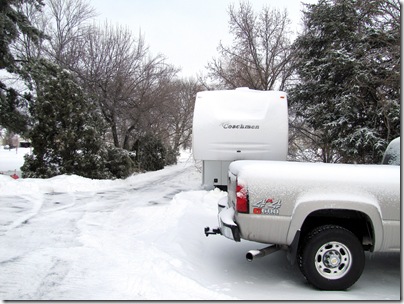 As you can see the new snow is easier to plow than the old ice was. The area by the trailer and truck had been done last night so there is only a couple of the last inches to get rid of, about every 4 inches we would go out and run the plow over it and it makes it so much easier. We should get it all cleaned up and final finished this afternoon. Then I hope we can say good bye to snow for awhile.

Donna took today off again, as the roads were still snow covered and they were asking people to stay home if possible. I'm glad she can use the rest, before her breathing and heart problems she would have been right out there on the plow or with broom & shovel in hand. Now she can't do that kind of labor, but makes up for it by keeping the chuck wagon going, like the homemade hot biscuit's this morning. It's 17 degrees right now and that is supposed to fall to -5 to -10 below tonight. Those temps would be really hard on Donna , I always wear a scarf or face mask when it is that cold. When I was in the Navy we had a guy that nearly died and was permanently damaged because he got frostbite to his lungs breathing super cold air without a mask.

Well that's about it for the news for today, hopefully the highways will open and life will return to normal tomorrow. Be safe out there. Sam & Donna...

Posted by Sam&Donna Weibel at 1:04 PM