Up early with my bride, Nicole stayed the night with her Mom, so at 06:45AM we headed out to Augusta, Nicole & I to get her to school, We had about 2 inches of snow last night and I was surprised they didn’t cancel school in her district as it is mostly rural, but I guess they had so many snow days so far they took a chance on it melting fast. The roads were a little slick and snow covered in places so it was 30-35 instead of 50mph like you would on dry country roads.

Got home and checked the blogs, then at 02:00PM I headed back to Augusta to pick Nicole up at school and we stopped to do a little grocery shopping, at Shop & Save. Nicole is a great shopper and knew exactly where, the donuts, pop tarts, cereal, ice cream and other weekend necessity's were,we had originally stopped because we were out of milk. But it’s a Grandpa’s duty to spoil so I told her okay.

When we got home it was Friday, pizza night, and I had remembered to take a shell out to thaw. I asked Nicole if she wanted to attend Grandpa’s Pizza School and she said yes, here is Chef Nicole in training. She did all the steps herself.. 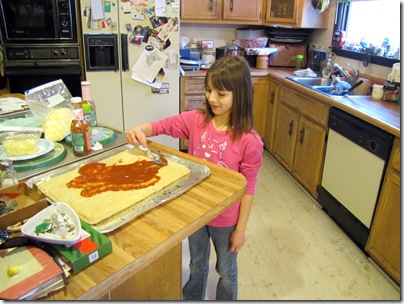 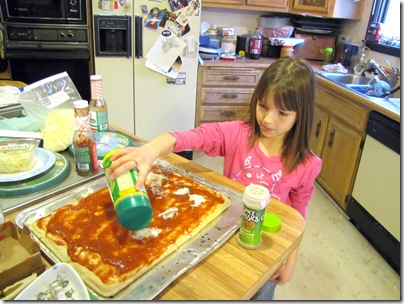 Some grated Parmesan on. 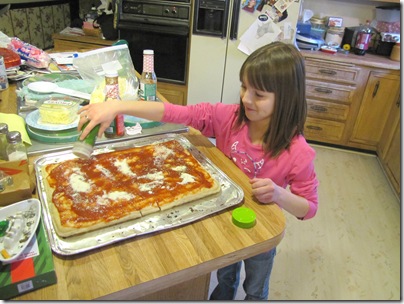 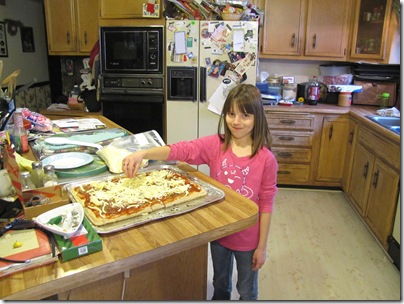 Graduation, The Finished Pizza, And it was Yummy..

Who was the French singer that sang, “Thank Heaven For Little Girls”. The chance I am having now of having another Granddaughter in my life is truly a gift from God and I am enjoying it so much.

Adam couldn’t make it this weekend, he is having a couple buddies from school over for a sleepover at his new house, so Grandpa understands, As the kids get older they need time with friends too.

Rigg’s the stealer was at again and while we were making pizza, he stole one of Nicole’s Barbies and decapitated her at the waist, Nicole was understandable upset, but Grandpa performed emergency surgery and got her lower body reattached and so the only damage was to her dress , so me and Nicole are going to Wal-Mart to see about a new dress for Barbie.

That’s the news from Dardenne Prairie for today, I hope everyone is having a great day. Please, be safe out there..Sam & Donna….

Posted by Sam&Donna Weibel at 5:35 PM