Up early I didn't have coffee this morning with Donna because I laid on the bed with Rigg's and Sadie while Donna was getting ready for work and must have dozed because when I opened my eyes it was 05:45AM and Donna was gone to the truck company.

I want to extend a big welcome to my latest follower here at the Weeb Ranch, WAYNE&ROBERTA, They have a blog just click on their name, I hope you guys enjoy the antics of the Weeb Gang, and sooner or later we will be back out in the 5th wheel for seeing some more of this country.

The house is like a tomb this morning no kid's noise. Samantha had a Doctor's appointment and he said she is to remain off work for a week and continue to rest and not disturb the healing process. But that sounded like good news to us.

I guess the pooches were watching me read blogs and saw me reading KAREN"S blog, She had pictures of Duke & Duchess in the tub getting a bath, They wanted equal time, so here is a picture of them sharing some quality rug time the other morning. 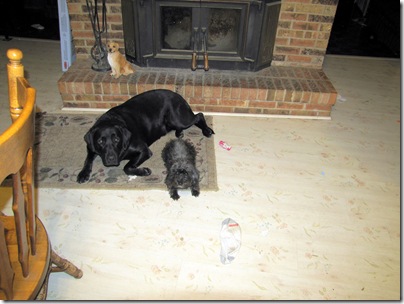 Rigg's and Sadie sharing their rug.

When the kid's aren't here I become the center of their universe and the competition for attention is fierce, no fighting, but Sadie will jump up and push Rigg's away, or worm her way between us, she is so feisty for being so small and is absolutely fearless in getting her way, I have to think if I was Rigg's I might get tired of it, but he is such a gentle Ben he just takes whatever she has to dish out. She will be growling away pulling on her end of of toy, and you never here a peep out of Rigg's he controls his strength so she has a chance to pull.

Then if I jump up the bed and put a movie on, they both get up with me and either snooze or in Rigg's case I sometimes think he watches the show too, by the way he follows the action with his head.

My son is finished with all the paint and trim work and is tearing out the old carpet out of his room today, tomorrow they deliver and install the new carpet and we will be able to move his furniture back in and I will have some space back in our house. I have to say he did a great job, I think he is going to rehab one room at a time, He keeps saying he wants to buy the house, so only time will tell. It would be great for him as it has plenty of garage space, and an out building and he would have plenty of room tor his tools and race cars.I told him if he bought it I would let him have John Deere and leave the compressor and most of the big tools for his car hobby.

JUDY-TRAVELS WITH EMMA mentioned in a comment that the picture of the kid's showed them without jackets and no snow and wondered if it had been taken last summer. Well no, we have had three days in a row of 50-60 degree temps and I did make them wear hooded sweatshirt jackets, They wanted to go out without them, but I said no. But the parking lot was clear of snow except where it had been plowed into piles and that wasn't in the picture. We have had a lot of snow melt and it is 60 again today, I have most of the snow on the grass gone here, but the piles along the driveway where we plowed will be here for at least a couple more warm days. There is also a lot of running water across the front of our property and out into the street.

That's about it for today I hope everyone is safe and having fun out there. Just be careful out here. Sam & Donna...