My bride and I were up about 05:30AM for our morning coffee, she went back for a nap and I decided to hit the computer for some blogging. About 09:00AM Adam asked if he could call his friend Brandon who live behind us, in less than a minute I heard what sounded like and elephant coming down the stairs and it was Adam, "Grandpa can I go out and play with Brandon he's on his way over", I said sure make sure you have a jacket it's only in the 40's, out he went like his pants were on fire.

Nicole and Chris are at their father's for his weekend. Seems like most kid's today have parents that are split up, I thank God Donna & I weathered all of life's storms so far.

Here is some news, while I was picking up kid's from school and stopping at the McDonalds with the playpen on the way home, Sadie was at the groomer's, wow, what a difference it makes , you can see her face now and her fur isn't dragging on the ground.  What do you think? 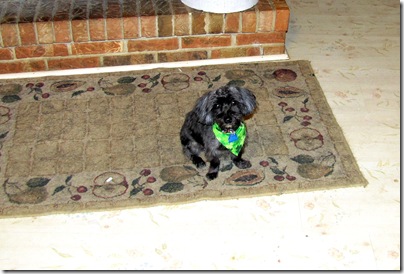 Grandpa what does pretty mean? 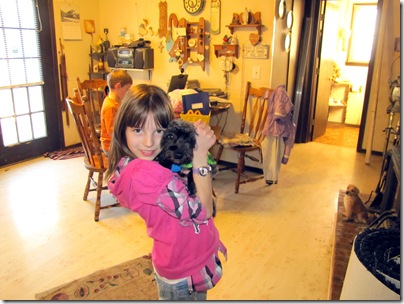 My Big sister Nicole is holding me. 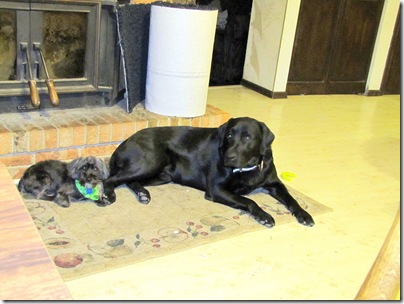 This is my big brother Rigg's, He is my best friend & protector.

Donna has the restaurant tonight, but this morning she said those word's that strike fear in every man's heart, I am going to target is there anything you need, I said no honey, unless you happen to be stopping at the John Deere dealer, I could use some plugs, and air filter, fuel filter,oil and oil filter, and oh yeah three new blades for the deck. All I got out of that one was a "Yeah Right".

That is on my list of things to do when I am sure the plowing season is over and I go back to the cutting mode, probably the first of March. 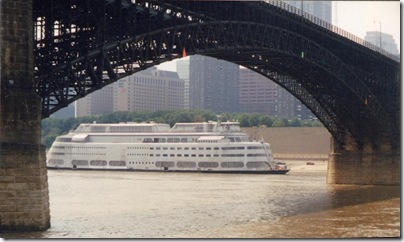 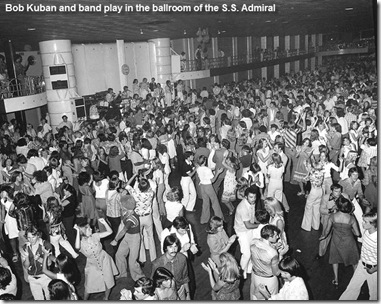 The Main Ballroom with Bob Cuban Brass, what a way to spend a night after a great Dinner in one of the dining rooms. 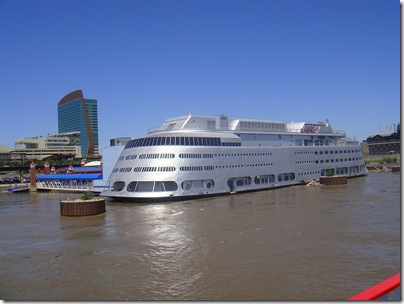 In it's last days as the President Casino.

How many out there remember the SS Admiral showboat, for many, many years. It was a fixture at the St Louis Riverfront, Making daily cruises and evening Dinner and Dance cruises, It was the largest riverboat on an inland waterway in the US powered by three 900hp diesel engines. It's 1930's art deco styling was a classic, that still seemed modern in the 70's when Donna & I used to cruise it.

In the late 1970's it failed a Coast Guard inspection for seaworthiness so it was converted to a floating Casino.

That lasted until 2006 when the Casino face changed in St Louis and it became out of date.

In about two weeks it will be towed north near Alton Il, where it will be cut up and scrapped. The end of an era as there is nothing like it left on the river today.

I know nothing is forever, but somehow to this old guy the riverfront will never be the same without the lineup of riverboats from my youth. SS Admiral, SS President ( not to be confused with the renamed Admiral after it became a casino), SS Mark Twain, SS Becky Thatcher, and yes they even had the MacDonalds Barge. The last cruise we took was on the steamboat SS President it was a great night with friends Barb & Rick Ferron and their daughter from PA. It was filling in for the Admiral that was being repaired and it had the Bob Kuban Brass,  playing in the Ballroom.  All I can say is a know a 15 year old teenager that had stars in her eyes when she got home from that night on the river. The band is what really made it happen, they would fill that ballroom with sounds you couldn't get anywhere else, Rock, Jazz, Rhythm & Blues, Swing, you name they could belt it out and the night just seemed to go on and on.

To bad you can't bottle those kind of memories for a special occasion, I would line up to buy a bottle.

Before I forget, I got a request for a progress report on my sister Wendy, she is still on the walker but she is being allowed to drive and the strength is coming back to her ankle to where she is able to put more weight on it. She hopes that by April the walker will not be needed and she will just take a cane for when she is tired. Also Samantha is taking her medicine and says she is feeling better so maybe the injured list will be shrinking around here.

That's about it for today, Adam had spent the day running and trampolining so he will sleep good tonight. Be safe out there. Sam & Donna.

Posted by Sam&Donna Weibel at 4:24 PM