Up early with Donna, then she was off to the truck company, I then went down to my office to do some serious blog reading. What a life. Not much else to due when it 16 degrees out. Anyway I read JUDY & EMMA"S, post about their visit to the Mississippi Vietnam Veterans Memorial in Ocean Springs MS. It ended up being a very thought provoking post for me.

As some of you know I was contacted by another of me Navy squadron mates a few weeks ago and he had some pictures he took while we were on HC-2 Det38 on the USS Shangri-La together.I will show you  a couple from 1967-68. 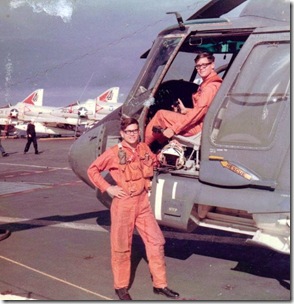 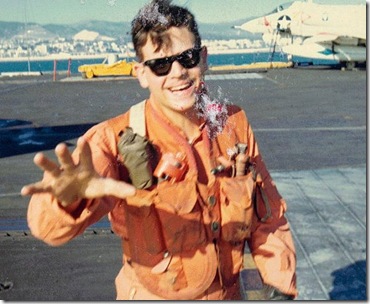 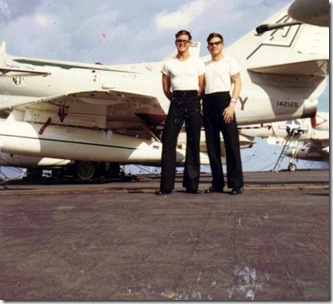 A little bit about Doug Wainright, I met Doug at NAS Lakehurst on Sept 14 1967 when he and what was left of Det 59 from the USS Forestall arrived home after surviving the worst fire in the history of US Carrier aviation. The Forestall was the first super carrier and was home ported at Norfolk VA.

On July 29th 1967 ,four days after starting combat operations against the North Vietnamese, at 10:55AM while the morning launch was getting underway, a Zuni missile accidently fired from an F-4 Phantom parked in the rear of the flight deck, it streaked across the flight deck and struck a fuel tank on a wing of an A-4 Skyhawk, that started the fire and explosions that were to claim.134 dead, and 161 injured, On carriers the aviation people are divided into day check and night check since it is a 24 operation, most Dets shifts were 0700am to 1900PM and 1900PM to 0700AM. That means half the Det is sleeping at that time of the morning, HC-2's sleeping compartment was directly below where the first bomb explosions were and they were wiped out , about 15 men. Two helicopters were below in the hanger deck and were destroyed by fire, the one on the forward flight deck getting ready for the launch was damaged but was repaired in time to assist and remained the only Det aircraft left until they returned.

Doug once said it was the scariest day of his life but he was lucky and only got a couple of scratches, he assisted in firefighting most of the day. Here's a couple of pics. 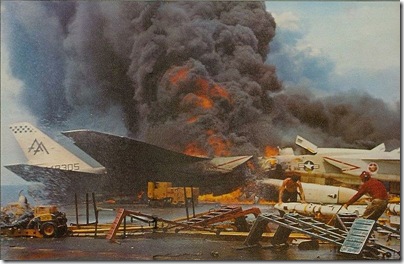 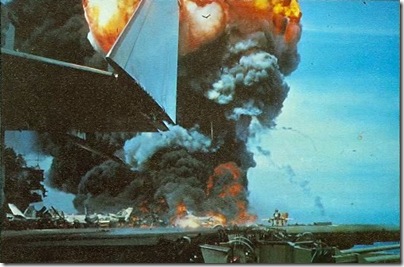 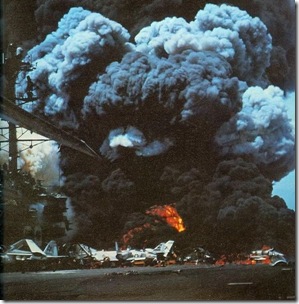 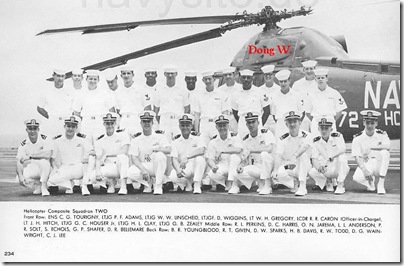 About a month later in Oct 1967 we were getting ready to leave on the Shangri-La Det for Mayport Fla to meet the ship and who shows up at muster but Doug, When they needed another  rescue crewman due to a sick replacement Doug volunteered, this a guy who had just a month earlier had come back from what most people would call a life changing experience.

Another footnote, the pilot of the Skyhawk whose wing tank was hit by the rocket was LTJG John McCain, later POW, Admiral, and now US Senator. How he managed to escape all the flames and explosions, let alone his time in the POW Hanoi Hilton is a miracle in itself. It truly is a small world.

Oh see those bright orange flight suits, they found out (duh) that they made you a perfect target for small arms fire, you could see them a mile away. Right after we got back from that cruise we had to turn in all the orange and were issued dark green nomex flight suits, that were supposedly fire resistant, they also found out in most survivable helo crashes you were at least soaked in fuel or hydraulic fluid, so much for the fire proof idea.

Where were the sleeping spaces on every carrier I was ever on, directly under the waist catapult on the rear of the fight deck, Some things never change.

Thanks Judy for bringing back those memories, and giving me a chance to introduce my friend Doug who was the nicest young man you would ever want to meet, a true American hero yet modest to a fault. As the correspondent said in IRAQ " Where do they find these kid's" That's easy in your hometown, mine, Doug's, The majority of American kid's are decent patriot kids with good values. To bad the other element gets most of the press. GOD BLESS THEM ALL.

That's about it for today  Be safe out there. Sam & Donna.

Posted by Sam&Donna Weibel at 4:25 PM