Up at 04:30am and the coffee was ready, Donna was ready to leave at 05:30am but since Andy has his race car in one stall and my truck in the other, she had to start her Escape and let it run for a few minutes as it was 12 degree's out this mornings, They are predicting a high of almost 60 on Friday so maybe the subzero temps will leave for awhile. I know you have seen the pictures of Minnesota, and Wisconsin on other blog's but I will post a picture my son Sam sent me from his Condo on Manhattan this morning. They got 23 inches of snow in a blizzard like storm last night. The city is virtually shut down. 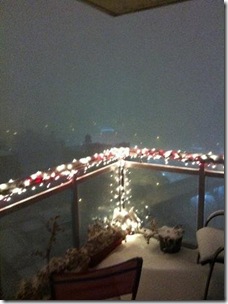 My son Sam's Condo New York, NY
He said there is no air service as all the airports are closed, no cars or taxi's moving today, and the subway's and commuter trains are barely running, Amtrak cancelled all service between Washington, New York & Boston. Sam says he will be working out the the house for a few days.
We on the other hand were lucky and got only a few inches on Christmas eve jut enough to make it a pretty Christmas. Even Scranton Pa., dodged the bullet and only got 6 inches from the fringe of the big east coast storm.
I can only hope that all our friends that went south in search of a warm winter don't suffer like last year and they get the warm weather they should be having.
Rigg's stuck close to Dad today it was just the two of us, I had about 4 loads of wash to do and he jumped up on the bed while I was folding each basket and was doing all he could to help.
Then I put a train movie on and he took about an hour nap next to me on the bed. I think he enjoyed it as much as I did.
Waiting for Donna to get home from the truck company. Tonight we will have Tovar's, probably some of the Lasagna from Christmas night. I even have some Cannelloni left over so I can mix them if I want. I sometimes get hungry just thinking about what to make for supper. Is that normal.
Oh I have to tell you The day after we exchanged the defective Mr. Coffee at K-Mart for another one, that one quit, it would make coffee but the clock quit so you could not set it to brew right before you got up. It was a sale item and they had a ton of them. so I took the second one back and when I went to the service counter, This was on Christmas Eve day morning, the store Manager happened to be standing there and heard my tale of woe. he said, come on back and let's see what I can do I can't blame you if you don't want to try a third one after two in a row failed. Well the sale price of the Mr. Coffee was $19.99. they had a Hamilton Beach model for $24.99 so I said what about that one he said sure, but then we couldn't find one in a box, so he pointed at another Hamilton Beach that was really fancy for $29.99 and said how about I mark this down to $24.99. So I ended up with a nicer machine for $5 more. So far it has made coffee the last three mornings so I must have got a good one.
Not much else going on. I hope you all are enjoying the Holiday break. Be safe out there.. Sam & Donna...
Posted by Sam&Donna Weibel at 3:58 PM