Another fine cold morning, after our coffee break, where I had to share my time with Rigg's throwing his ball at 04:30AM, He is just an attention hound without Sadie to keep him busy. Try sitting and drinking coffee and holding a conversation with your bride and having a combination of drool and ball dropped on your lap every few minutes.

Anyway it was off to work she goes' at 05:30AM. and waited around and blogged until 08:00am then I had several errands, Rigg's over the last couple of years has really done a job on the two mini blinds on our back door. So I went to Lowe's. It makes no sense to buy an expensive blind if the dog will paw it occasionally so I asked the girl in the window treatment department what she thought. As luck would have it when I told her about Rigg's, she said I have a female lab and I know what you mean. She steered me to their cheapest plastic mini blind and for the tall one for doors it was only $3.99 a piece, I was expecting $15 or more, I told her now if he tears one up it is disposable.

From there it was off to the auto parts store where I was looking for some of those rubber tire chain tensioners. They did have them so I thought, well if Farmer Charlie's Farm supply doesn't have them they don't make them, I was right, they don't make them any more. There is hardly any market for tire chains anymore, the pair I use is on the tractor when I plow. But the guy suggested some small rubber tarp straps with extra S clips that will do the same thing. So I was a happy camper when I left there. The next stop was Petsmart where I had to by three more links for Rigg's training collar, seems as though even though we bought the large for him in August he has added a few more pounds around his neck and it was getting tight, even when tension wasn't being put on it to train him. So he's a happy camper too. Then the last stop was Shop & Save where I decided to get some nice cube steaks for our supper tonight. We like them and I bought a fresh bag of potatoes so we can make whatever kind of spuds we want to go with them, even though you must think we eat a lot of Italian cuisine, We are basically a meat and potatoes country bunch here, Donna especially loves hash browns. One of my favorites is Donna's homemade potato soup.

I had to go into the vault and blow the cobwebs off a picture for today, it was taken right before Donna and I were married at my Mom & Dad's in PA. when we visited so they could meet their future Daughter in Law. I can't believe I was allowed to grow my hair that long for a short period on PD. 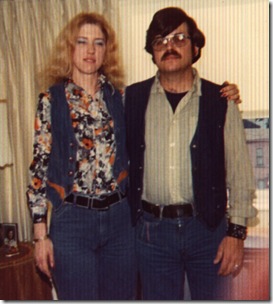 Well that's it for today, Hope everyone is enjoying themselves. Be safe out there. Sam & Donna..

Posted by Sam&Donna Weibel at 3:57 PM