Well we had a night of it here at the Weeb Ranch, Andy's girlfriend Samantha woke up in extreme pain in her chest, Andy took her to the E.R. and after test they determined she had a broken sternum, the Doctor thinks she did it last weekend when she was sledding with the kid's, so she is ordered to bed with pain killers. And has to rest for awhile. Grandpa rode to the rescue this morning and told all the kid's that condition Zebra had been set around the house so Samantha could get as much rest as possible, she is knocked out anyway by the pain medicine. So Grandpa took the three kids and headed for Clarksville MO on the Mississippi River to Lock and Dam 25 for a chance top find some Bald Eagles, When we got there I  got a grab shot of one on the tripod really up high on 200 zoom, He ended up flying across the river and besides 4 others over on the other side that were to far away for a picture that was it for eagles, I was afraid of this because this is the time of the year they start heading north. Although last week they said they were all over the place.
I did shoot a dark colored bird that looked like a heron, maybe Judy can identify it, but beside gulls that was it for the larger birds. 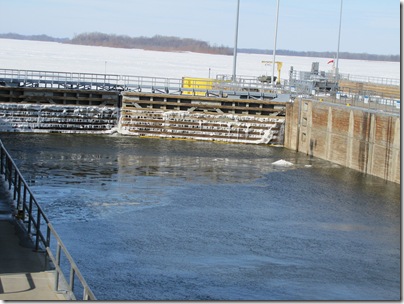 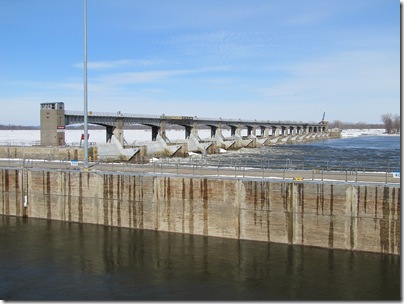 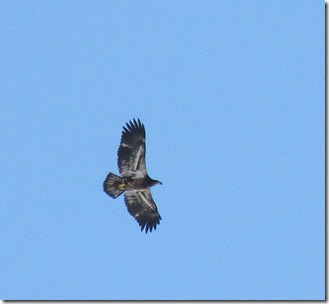 My only Eagle shot. 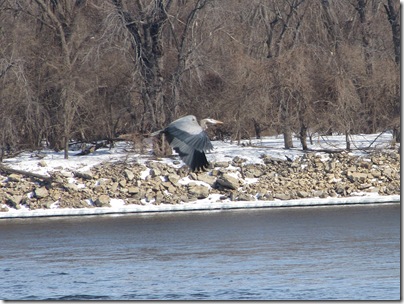 Is this a heron Judy?
We spent about two hours up in Clarksville but it wasn't a complete bust, the kid's met up with a bunch of other kid's their age and they ran and played and climbed snow piles and wore themselves out to the satisfaction of Parents and Grandparents alike, Clarksville is on Hwy 79 just south of Hannibal Mo. and has a great visitor's center, tours of the locks when the barges are running, and clean rest rooms and pavilions and picnic area's. I have been up there in the summer when the river was busy and it is neat to watch the barges going through the lock.As an added bonus the BNSF RR has a track right next to the park and coal trains to the Machens MO. power plant go east full and west empty. So the kid's can watch trains and boats.
We saw one coal train but as you can see the river is frozen solid west of the Lock & Dam and there is no barge traffic north of St Louis yet, probably be in March before it starts up again.
All in all a fun day and we didn't get home until 04:30PM after a late lunch at Steak & Shake, Nicole and Chris surprised there Mom with a Double Chocolate Ice Cream Sundae, So she was feeling better. They are really good kid's and they all behaved and got along with all the kid's they met. I look forward now to the camping season starting and taking them all to the Lake for the weekend.
Hopefully we can go someplace tomorrow to let Samantha rest, I'll have to give that some thought, maybe one of those kid places that has a play area and you can get a lunch or a pizza, someplace where they can be around kid's and cut loose a little.
Hope everyone is having a fun weekend, I know I am. Be safe out there. Sam & Donna...
Posted by Sam&Donna Weibel at 5:11 PM