Just a short post today , We were up early as usual and then Donna was off to the truck company. Spent all day getting Andy’s race car fired up, he has decided to sell it. The starter went out the last time he had it out, so we went to get another,  $206 was the price. Got it home and it was the wrong one, when we got the old one off the one mounting tab had broken off, that’s why it wouldn't engage the fly wheel, made another trip to Auto Zone and got the right one, came back put it on, and the battery was dead, so I put the charger on it, when we had tried it but it would not turn over fast enough to start. Then we decided to take one of the batteries out of my truck and try. This time , clang the starter hit the flywheel again like the original problem. Took it off and the mounting tab on the new starter was broke, I spent about an hour trying to figure out why this was happening and then I discovered that the short bolt,( the starter is mounted with a long and a short bolt) was going all the way down and the shoulder of the bolt would reach the hole and appear like the bolt was tight, but there was just enough play for the starter to twist very slightly and break the tab, then it would twist the next time and the starter drive gear would hit the face of the flywheel and not engage it. Evidently a previous owner had changed the starter and lost a bolt and replaced it with one just slightly longer Back we went for another starter, luckily they are covered under warranty for this breakage and came back. Now even after sitting all winter in the garage,  it fired right up, boy what a racket, we had drained the tank prior to storing it so it had fresh gas, Andy was happy as a lark. He is getting up at 08:00AM to wash it and a guy is coming in the morning to look at it, I will take a couple pictures of it before it goes.
Donna came home just as we were starting it, I think she will be happy with something a little quieter, it has a Corvette LS6 motor that cranks right as 1000hp with the NOS system engaged. It will bring the front wheels off the ground in a wheel stand. which is always a crowd pleaser when he would take it to car shows.
Donna decide Lucky would like a walk. He is sure something, but he walks good on the leash as long as you go where Lucky wants to go, good thing we have 2 acres for him to explore, Donna said he did not want to go back in the fiver and sat down and she had to pick him up and then he voiced his pleasure and squirmed like crazy. just like a little boy. 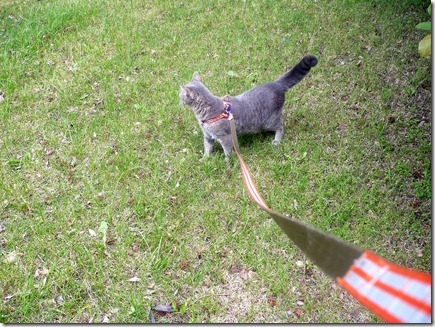 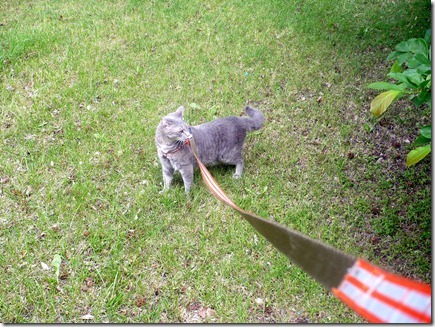 Hey MOM & Dad I’m exploring the Weeb ranch..
That’s about it for now. Be safe out there, Sam & Donna…
Posted by Sam&Donna Weibel at 4:30 AM