Another hot one today, Donna & I were up about 05:00AM and had our coffee, The thermometer said 82degrees at 05:30AM. I went out about 09:00AM and cut the back again, I will have to keep going over it every few days until the hay is mulched up. Thank God the big deck has three blades and really cuts it up fine. As long as it is dry when you cut it. With the new belt there is no slippage and it is spinning like crazy. But even after an hour, the heat was getting to me so I said that’s enough for one morning, I will go out again tomorrow morning and cut about an hours worth, and just keep plugging at it. I guess the weatherman was wrong , instead of 95 the thermometer is set on 100 again at Noon.

The two furballs just go out when it is absolutely necessary and then lay on the rug next to my chair in the kitchen under the ceiling fan. 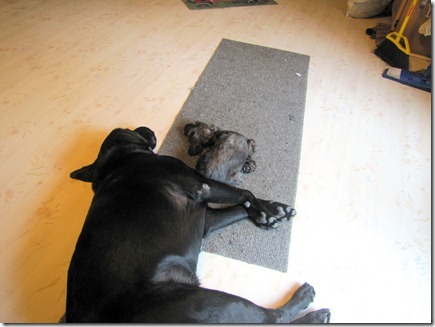 Sadie sleeping in big brother Rigg’s arms. I guess she feels safe there.

While I was cutting this morning the tractor cut out a couple times, I went and got a new fuel filter and air filter and changed them, It’s been so dry and dusty with the heat wave, I just wanted to make sure it was breathing and getting clean fuel.

Donna is getting ready to go to the restaurant, she got a surprise night off when a big party cancelled due to the heat and they had overbooked on help, So her boss asked her first if she wanted the night off and she said yes.

With this extended heat wave were in I am really getting cabin fever, I can’t wait for it to cool a little and then maybe head for the Lake for a week or so. The kid’s will enjoy it too. Don’t feel like I’m getting much accomplished when you have to limit your time outdoors.My Son is working 06;00AM until Noon and then the boss is sending everyone home after it’s over 100 degrees.

Hopefully Monday I will hear from Adam and see when he can come over to camp with Grandpa. I’ll bet it was hot in Orlando Fla.this week. Hopefully they got their daily rain showers each day to temper things. We haven’t had any daytime rain in weeks and only one or two nighttime showers.

Not much going on here at the Ranch. Be safe out there. Sam & Donna.

Posted by Sam&Donna Weibel at 3:18 PM