Up early with my pretty bride, she then had to go to the truck company, after spoiling her with grilled brats in BBQ sauce last night I decided tonight since it is her last night of home cooking for the week until Sunday, I will make a batch of Grandma Genett style meatballs and have Spaghetti & meatballs.

It is another scorcher today. 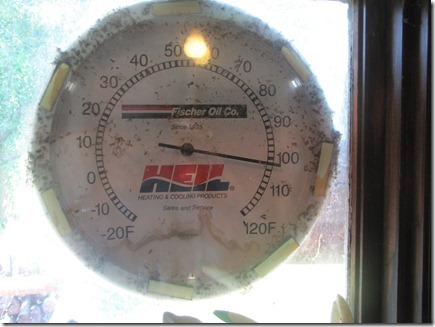 102 on the kitchen window at Noon.

I didn’t even ask about the Lake or pool today, since it was a no at 100 yesterday. Guess I’ll have to wait to spoil the kid’s until it drops back into the 90’s later in the week, but they are saying over a hundred again on Saturday. They had one death related to heat in the City of St Louis, and also an elderly man drowned out at Lake Sherwood, where we have our property after he fell off his dock, it said he was handicapped and was returning from a boat ride when he fell in and a neighbor and paramedic couldn’t get him out in time to save him.

The kid’s are taking it in stride and playing inside all day,

This morning I had to go down into the garage because the deck belt had popped off the John Deere last night when my son started to do some cutting, since it was only 85 at at 08:30AM I decided to cut for about an hour and just about an hour later the belt popped off again. It must have stretched so I went to three places and nobody has a belt for a big deck like mine, I ended up ordering it from john Deere, $55 and it will take two days to ship to the Deere Dealer. So it looks like John is dead in the water for a couple days unless it snows, the plow will still work.

Saw that JOHN & CAROL of  5th Wheel Wanderings are riding dome cars and steam engines in Colorado, boy that is on our list to do, Most high on the list will be the Durago & Silverton, The Cumbres & Toltec, and the Rio Grande Scenic Railway. Here is a picture of one of my favorites. 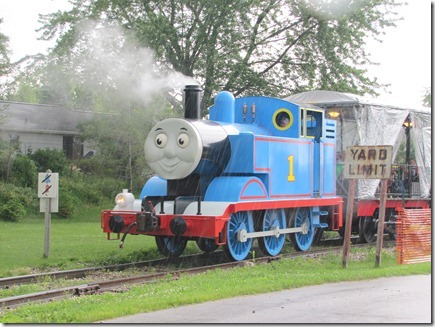 Adam used to like Thomas too, but he outgrew him.

The dome car picture they posted brought back memories of a Dinner train trip on one of our wedding anniversaries that Donna surprised me with, We rode and ate in the Dome Diner, and then danced in the Lounge car, alas the train has left St Louis to become the Kansas City Southern Official Train. The Locomotives were sold to Norfolk Southern for their Office car train. The trip can’t be duplicated today. But they have started a Dinner Train in Columbia MO. so we look forward to maybe doing that someday.

That’s about it for today, oh yeah, just want everyone to know I’m not going to complain about the heat or heat index, I remember all to well all the mornings, last winter and spring where my son and I had to get John Deere out a and plow snow, sure rather the hot weather than the snow. Be safe out there. Sam & Donna….

Posted by Sam&Donna Weibel at 4:46 PM