Was up about 06:00AM since it was Saturday and had coffee with my bride,

Adam came over last night to spend the night so he was up about 07:00AM. We made plans for a Wed-Sun camping trip to the Lake if it cools down some.

He is going back to school on the 18th so this will be the last he can enjoy a week stay, we will hit the campground on weekends a few times in Sept and Oct until it is to cold to swim, usually around the second week of Oct. Can’t believe his summer went by so fast. I liked it better when school didn’t start until after Labor Day. 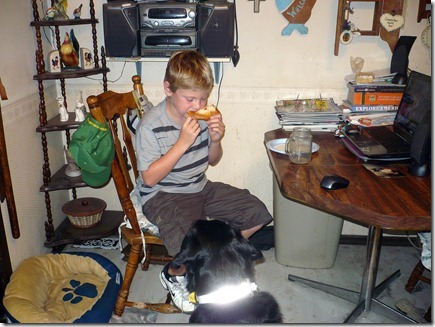 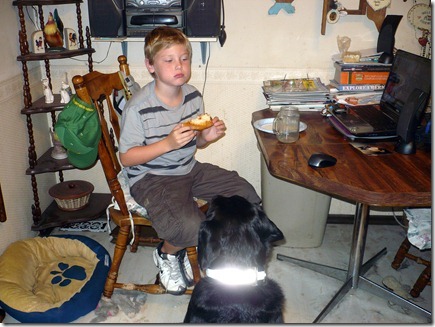 Adam having left over Friday night pizza for lunch, Rigg’s hoping against hope for maybe a crust.

As you can see Rigg’s got a new glow in the dark collar like his old one, he just wore it out with all his swimming and the reflector stuff was about gone. It really shows up if he is out on a walk at night and any car headlights light it up. Since we have sidewalks now out here in the country it is a lot safer than years past. Of course most of the farm fields had cow fences so if you cut across a field you didn’t need a leash.

Adam told us about his trip to Fla. they went to Universal Studio’s , but not Disney World. We told him when we are fulltime we will fly him down there to meet us and go for a few days. We took his Father there when he was a youngster.

Took a trip for a couple of items at Walmart this morning, while we were there Adam asked if we could go to sporting goods to see if they had gotten the M-16 bb rifle he wanted and had been saving for. Well they had and he got his wallet out and was heartbroken to find out he was ten dollars short. Grandpa told him if he was good about his chores, I would advance him a couple weeks allowance and he would have the ten dollars to buy his rifle. He was a very happy young man when he got home to say the least and he had to show Grandma his new rifle.

I’m sure next week the garbage will fly out and the dog will be fed bright and early, which are among his chores.

We had some rain today, a really heavy soaking rain that lowered the temperature from 85 to 75 for awhile, the sun came back later but it is still only 83 so we have a nice summer day after all.

That’s about it for today. Hope everyone is having a great weekend. Be safe out there. Sam & Donna..

Posted by Sam&Donna Weibel at 6:12 PM