Was up at 04:30am for coffee with my bride, did some blogging,Then read a train book. It is only 95 degrees today with the heat index down to 109. I saw on KEVIN & RUTH’s blog today that they were in North Conway NH and stopped at the restored train depot and took some pictures for me . One thing really caught my eye and it is below 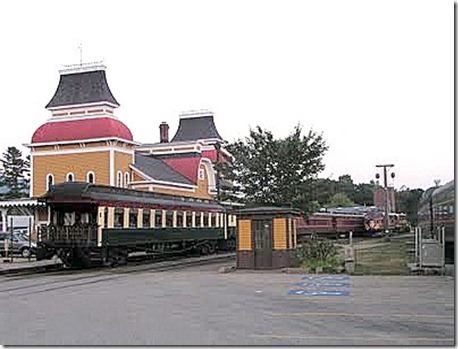 Not only is the depot beautifully restored, but on the right on the background between the tracks is a rare example of and old manual High Ball signal.When trains approached a kerosene light was lit inside the red globes or balls on the rope and if it was clear to proceed the ball was raised to high position as both are shown in the picture. Usually just the track to be used was raised at one time. This was the origination of the term Highball to get a train going from the station. Pretty neat a little history lesson while your out taking a walk and looking at the scenery. Thanks Kevin & Ruth.

Looks like we will be seeing some improvement here in the weather tomorrows high will be 95, Sundays 96, and then Mon-Tues 88. Looks like we will be getting back close to normal soon. This year we have had all kinds of extremes for weather here in MO. Won’t be surprised if we get another hot spell in August though.

Tried to hang out on Google plus this morning and Rick came on line , but I lost my connection so there still is a glitch, tried it again from the new laptop and the signal would drop out about every 5 minutes, I don’t have that when I use Skype so it must be in Googles program. they did say they are working on improvements.

Not much else to say, tonight is pizza night so that will be supper for Nicole & I. Everyone be safe out there. Sam & Donna….

Posted by Sam&Donna Weibel at 3:20 PM