Up at 04:30AM and had coffee, or tried to with my bride, the new coffee maker made about half a pot and quit. It was like tar. We have trouble with the water being hard since we use the cold water from the kitchen tap for drinking water and it only goes through the particle filter and not the softener, Hence the coffee machines have a short life span and clog up. I ran some vinegar through it and then some clean hot water and it seems to be back to working now, we’ll see in the morning.

No blog yesterday it was so hot I didn’t leave the house, and really had a complete sit around watch a train movie and just do nothing day.

To day the temps and humidity are back up the computer said 97 with a heat index of 115. here’s what the kitchen window said at 0300PM. 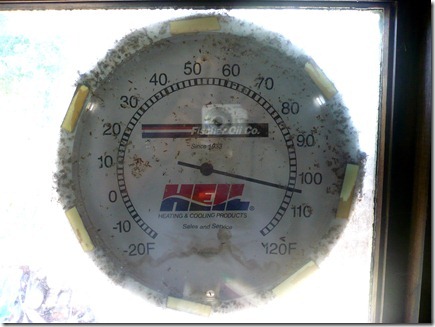 I will have to make the trek to the end of the driveway to get the mail from the last two days and bring the dumpster up. Maybe I will just take the truck somewhere and when it is all cooled down with the A/C come back in and bring that stuff up. Can’t really see getting all sweaty for the garbage dumpster and it hauls just fine on the back of the truck like a blue boy. 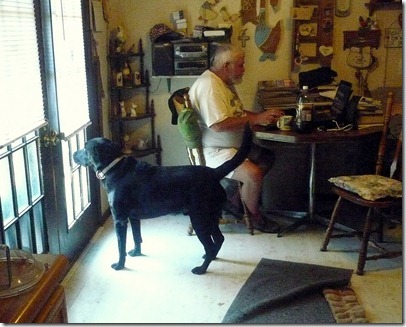 Something caught Rigg’s eye in back while I was working on the laptop.

I have been enjoying AL in Bayfield's last couple blogs with his remembrances of years gone by, and his essays on photography. I too truly enjoy photography and  I also started out with Pentax 35mm camera’s with a bag full of Takumar lenses, Had the K1000, which was like the 3 speed standard shift of Pentax camera’s, everything was manually set. I also had an MG which was my first auto focus 35mm. They all served me well. But when the digital age came. I waited as long as I could and then took the plunge. Do you know Kodak doesn’t make Kodachrome anymore. Anyway I now have a Canon SX20IS which is a big body but does not have a detachable lens, It does have a 35-200mm zoom and is 12 megapixels, with no delay when you shoot it. It also shoots HD video and stereo sound. I have found it just what I wanted for the pictures I take, and no heavy bag with multiple camera’s and lenses' to lug around. Donna has a Panasonic Lumix LS75 which is a point and shoot camera that does a heck of a job. Sometimes you can’t tell which camera took the picture, they are both sharp. 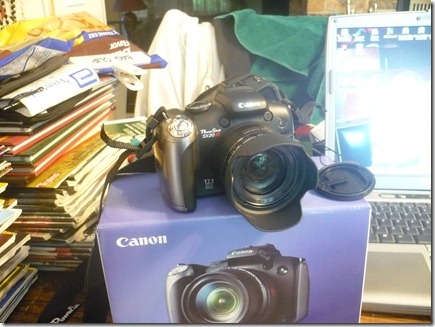 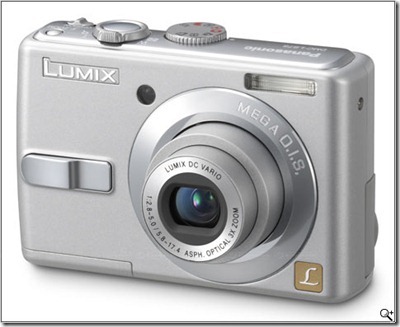 Now if  I could just get some cooler weather I could go find some trains to shoot, I still take my video camera and some tripods and set them up so I can use all my arsenal at once. Old habits die hard and I like the action and sound of video as a train roars by. Along with having the still picture to go with it.

Speaking of trains, I went out the other day to Farmer Charlie’s and on my way a Norfolk Southern train hustled by with three diesel units on the front at what was probably the track speed in that area of 60MPH the middle unit must have had a blown turbocharger as it was pouring black smoke out and drops of unburned fuel  like rain. What a picture it would have made, more smoke than a steam engine. Where was my camera, on the kitchen table next to my laptop, the first time I had forgot to take it with me in the truck. Yep Al you can’t shoot without a camera.

Well say a prayer for some cooler temps here in Dardenne Prairie, not complaining though I will remember this heat when I am putting Carharts on over long underwear and jeans, and getting on John Deere for an hour or two of snow plowing. We’ve had it all, this year. A month of heavy snows and now almost a month of 100 degree weather. But we can take it, yep , and the grass is still growing, doesn’t  it know we are in a heat wave yet.

Hope everyone is having a good week out there. Be safe out there. Sam & Donna……

Posted by Sam&Donna Weibel at 3:49 PM