I was up at 06:00AM and had coffee while my Grandson slept he woke up at about 08:00AM and had a glass of milk and a donut, I had promised him a present for staying on the honor role all years and this was the first chance I got since school let out to take him to Wally World. The closest one is in Washington MO. so I said I would buy him breakfast at McDonalds too. If he was writing this post he might spill the beans on how Grandpa got to the McDonalds and discovered he had left his wallet and money back in the trailer, so it was 15 miles back to the  campground  to get it before breakfast was bought. There might have been a couple of “oh hecks, and oh darns muttered”.

Once breakfast was out of the way we went into Wal Mart and he said he wanted to buy a bb gun shotgun that shoots those ceramic bb’s instead of steel. I told him it was his choice as he earned the present with his hard work. He got the shotgun and also bought a 45pistol with money his Mom had given him, he also has the AK47 he got for Christmas. so he is now fully ready to defend the campsite from wild animals and terrorists.

I told him I was going to rename spot 15 to Firebase Adam. 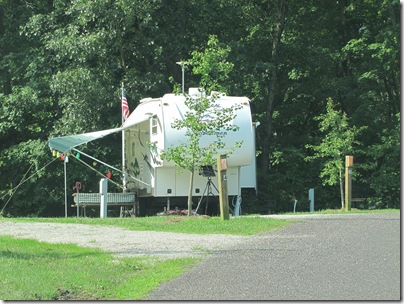 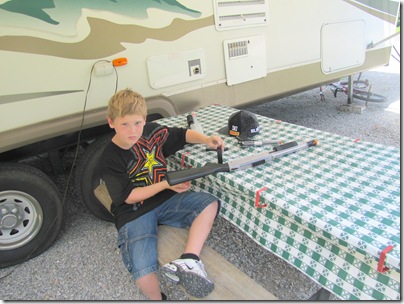 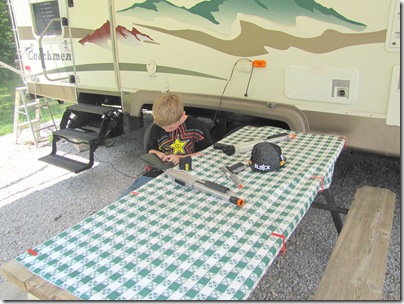 Once he was done with that we got ready and headed to the beach/pool for the afternoon, another great day in paradise, sunny and 90, no sign of clouds so we will have a full day of swim time.

I will try to get this out when we leave the beach before heading to the campground.

Hope everyone is having a good week, with the limited wi-fi I have I wll be behind in following blogs and answering comment or commenting. Be safe out there. Sam & Donna

Posted by Sam&Donna Weibel at 4:33 PM