Up at 04:30AM and yes the coffee machine worked and we had full pot of coffee ready. I know my bride was happy. At 05:30AM she left for the truck company and I did some blogging.

I am still at loss with my Google Plus problem, it just won’t stay connected in the Hang up mode for more than a few minutes, then it loses connectivity, one of the readers said code 10 is a driver error, but the same camera and mic is working flawlessly on Skype where I talked to my sister in Pa for about an hour yesterday. Maybe Rick can arrange a Skype call with me some morning and we can figure this out, also I have to find a shortcut or icon that will start Google plus without going into the My account setting in my blog.

This afternoon I took my laptop and the GPS module I got with my Streets and Trips out in the truck and got it configured and working, I had never used it before but now that I have the 12 volt cord, which also worked great, I decided a test run was in order. I was really impressed, I especially like the trace feature which tracks the route you take and then you can save it in case you want to go that way again or send it to someone. 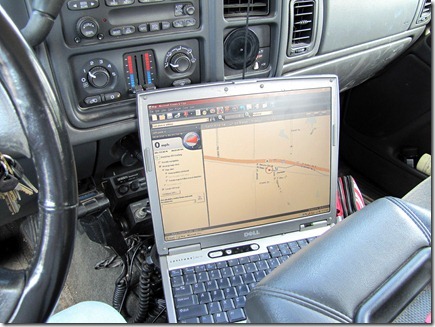 In the truck with the GPS.

I only went as far as Foristell MO. and then sat about 30 minutes along the railroad tracks until I heard on the RR radio that the local was working in Wentzville so I knew no other trains were do by there.

I am now going to have to make a secure mounting bracket or table, on the order of what the police cars have.I think I have enough stuff to fabricate some brackets and by moving my radios I can get something that won’t be in the way and the laptop will snap right in and out,

Maybe I will use the docking station as part of it and then the cables will be able to stay attached to the dock.

Still waiting to hear from Adam and start a camping trip. The rate at the Lake is so cheap it is almost cheap even if you leave the trailer there for a couple nights in between, they do have a 14 day limit and then you have to leave and come back. It’s never full though unless it’s one of the 3 major holiday weekends, and We don’t usually stay on those anyway. So nice in the fall when you can still swim and be the only ones there during the week.

Nicole and Chris are here today so I will probably make a homemade pizza for Friday Pizza Night.

Before I forget, I had a comment the other day about B&W Photography, I went to a crime scene school years ago at the St Louis Metro PD part of it was a two week photography course and then two weeks riding with the Evidence tech unit. (like todays CSI). Our department had a Speed Graphic, remember those, the old newspaper camera, we also set up a full B&W darkroom at the station complete with all the needed chemicals, and developing lights. Many a locomotive picture was also developed there. I remember the Instructor during the photo classes who always dwelled on how a camera will see more than the human eye, so take as many pictures at a crime scene from every possible angle and then go back after you develop the pictures to see what you missed. I still look at my pictures to see what surprises I have that I didn’t notice when I was taking the shot.

Not much else going on so I will say good bye for now. Be safe out there. Sam & Donna…..

Posted by Sam&Donna Weibel at 1:46 PM