Up for coffee with my bride, then we both had an easy morning.

First of all I want to welcome a new follower.MIKE MILLS -PHANNIE & MAE. He has been blogging for awhile under a different blog, check out his new rig and hence new blog name. Welcome Aboard mike hope you enjoy our travels to full timing and the daily goings on at the Weeb Ranch

I decided I would try to get my Red Max weed trimmer running, Back in 1993 when we had only lived here a couple summers and there was a ditch on both sides of the road and it was only two lanes,  weeds would grow so fast in the ditch you couldn’t keep up with it. I had a McCulloch weed trimmer, but it would stall when the going got tough, My neighbor would get into his ditch and weeds would fly in all directions and he would be green from head to toe when he was done but no weeds. I went over one day and said John can I try that weed whacker of yours, he said sure Sam just don’t let it get away from you with a laugh. Well after a short trial I said John jump in the truck and show me where you got that thing, so we headed over to Bill’s Lawn Equip in O’Fallon Mo. Where a short time  and $300 later I was the proud owner of my own Red Max just like John’s.

Each year at the end of the season I followed a ritual of running it out of gas and making sure the gas tank was empty and then each spring I would put a brand new plug in it and fill it with 30:1 2 stroke mix and it would usually fire up on the first or second pull. For eighteen years I was spoiled by this great machine. This summer I couldn’t get it to start. I tried another plug, no start so today I went down and put a meter on the switch and tested the ignition I had spark, I took a few ounces of gas and poured it in the Carb and it sputtered so I knew I had a fuel problem. I took the gas tank off and disconnected the fuel lines and tried blowing in them and one was plugged. I took them out of the grommet going into the tank and the one had swollen shut, I also found out there was a little filter in the end of one line inside the tank. so it was off to farmer Charlie's where I bought some new fuel line and a new filter. Brought it home and put it all together, and filled the tank with fresh fuel/oil mix and it started on the second pull. Boy for $5. It was purring like a chicken. Maybe I’ll get a few more years out of it.

Donna brought some gifts home for Nicole from work last night one of them was a puzzle and a piece of plastic to use as a puzzle board. Nicole was really interested so Grandma showed her how to start around the edges and go from there. About an hour and a half later she called us in the living room and her puzzle was done, sure it’s a small one to start out but she did it herself, and now maybe we will get a puzzle going and do it as a rainy day family thing I remember as a kid my Grandmother and Mother doing puzzles all the time.

While Nicole was puzzling, Donna (Grandma) had a project of her own, she was making a birthday cake for a co-worker.

The Baker at work. 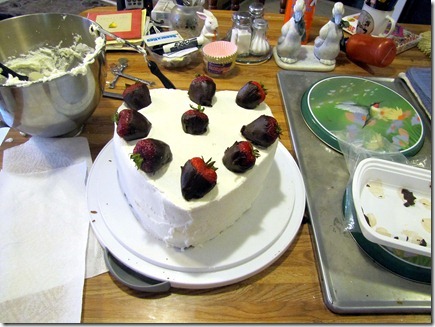 The Chocolate covered strawberries look yummy and are huge.

Sadie was also busy today with a trip to the groomers, 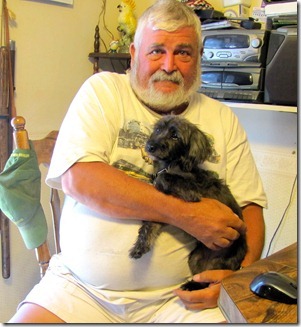 Sadie & Grandpa after she got her haircut.

Another day with the kitchen thermometer just touching 100, the weather widget on the blog says 96 but the kitchen window doesn’t lie. so I know it’s plenty hot again here in Dardenne Prairie. Hope maybe some of you are enjoying some cooler temps, there is a high pressure system stalled over us and is supposed to stay this way another week. But you don’t have to shovel or plow heat. Everyone be safe out there. Sam & Donna……

Posted by Sam&Donna Weibel at 4:43 PM