Slept great in my own bed last night, got up at 05:30 am just missing donna leaving for work. I had a coffee and a piece of Gooey Butter cake, Then went down on the computer. While I was in Iowa, Donna had sent me an E-mail saying that the check engine light came on on her Escape. That happened about three weeks ago and I took it to the Auto Zone and my friend Terry put the code reader on it and said it read #5 cylinder miss fire, he suggested replacing the sparkplug and then if that didn't fix it the next step would be replacing the spark plug wire, the Escapes don't have spark plug wires as the coil pack for each cylinder sits on top of the spark plug, yep six cylinders , six coil packs. Remember when a car had one coil for eight cylinders. Anyway it stayed off after I changed the plug so I thought fixed. This morning at 08:00am I went to Auto Zone and Terry put the reader on it again, this time the code said mass air flow sensor error. Terry asked if I had cleaned and oiled the K&N air filter lately and I said yeah right before I came over the last time about a month ago. He said a lot of those sensors don't like the oil you put on the filters after you clean them and it trips the code. So we took the sensor off and cleaned it in parts cleaner and then blow dried with air, I then put a regular air filter element in. Fired it up and within a few minutes the fault cleared and the light went out. Total cost $8.99 for the air filter, which is a lot less than $69.00 I thought I was going to have to spend on a coil pack.

Got home and decided to put the lettering I ordered on the back window of the trailer. Awhile back I saw a picture of Al of  THE BAYFIELD  BUNCH's motor home and he had a sign on the back that had his website on it. I thought it was a novel idea, and asked him where he got it. Al has a son in law in the sign business, but since I am 900 miles away, I put it on the back burner. Last week when I went to the Hobby Shop I saw a place that does signs and stopped and talked to the girl in the office she showed me how they make stick on vinyl lettering that is reflectorized and easy to put on, it comes on a hard paper and you line it up and then tape it in place with masking tape and then lift the bottom edge and peel the paper covering off the letters and it installs itself all spaced and in line. I told her what I wanted and she said there is a minimum charge of $35 dollars but that would cover the cost of what I wanted plus she would mail it to the house. So while I was in Iowa the envelope came to the house. 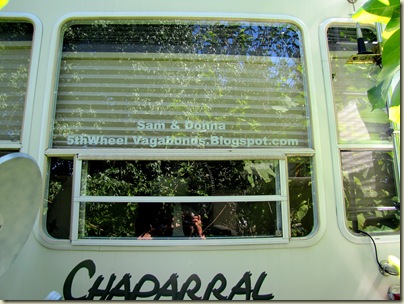 Here is the result.

The sun was shining from the right and I didn't have much room behind the trailer to maneuver but you can get the idea.

Waiting for Donna to get home from work been a pretty day around here and tomorrow I have a date with John Deere, I hope it is cool in the morning. Be safe out there. Sam & Donna.

Posted by Sam&Donna Weibel at 3:56 PM