Boy the weekend seemed to slip past and all of a sudden it was 04:30am on a Monday morning and we were having coffee and Donna was getting ready for work, Yesterday afternoon I got a chance to take a picture of my first hummingbird at the feeder it was a green color, but I had the camera on the auto setting and it focused on the tree about 20 feet behind it and I got a nice in focus shot of a leaf, but the bird was badly out of focus, no amount of sharpen could save it in Picasso so now I will have to set up a tripod and manually focus on the feeder if I intend to get a good picture, he came by twice yesterday once in the morning and once in the afternoon, I have been told they leave for the winter in late September so I don't have a whole lot of time to try to get a nice shot.

We got our first rain in seven days this morning, just a nice slow rain, that will surely wake up the grass.

Here's a shot of Rigg's from yesterday after he got home from the doggie park, he was one whipped pup. 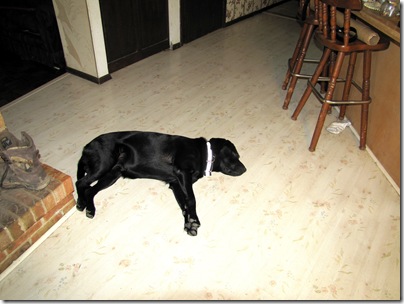 Just watching him made me tired so Mom & I got an hour nap. That's what Sunday's are for.

Since it was a rainy day and I didn't go anywhere or do anything, I sat at the computer and cataloged about 3000 train pictures I have swapped and downloaded since the first of the year, I always download into a newpics folder and then later sort them in to folders for separate railroads or other topics, like Museums, and Tourists Railroads. I was three hours before I finally got them done, now for a little while I will have a small newpics folder again. I save these on a separate hard drive so it doesn't clutter or slow down my desktop computer, and backup the picture hard drive with DVD's.

Not much going on in the bustling town of Dardenne Prairie, they started to pave the parking lot at the new City Hall, so maybe that is a sign of a better economy, it has sat for three years now, I can only hope since our property is in the new Dardenne Prairie Commercial Zone, so that dictates how easy it will be to sell, right now the project is stalled.

Guess that will be it for today the big decision now will be what to make for supper, I want to have a nice meal ready when Donna gets home from the truck company, Monday & Tuesday I cook and we have supper together, then for the rest of the week she is at the restaurant and I eat alone. Be safe out there. Sam & Donna.

Posted by Sam&Donna Weibel at 2:51 PM