Was up with my bride for coffee this morning, Rigg's was his usually Happy to be up with Mom & Dad self, "Oh boy, Oh boy it's Morning ,time to play, Oh Boy" Labs just are so wound up, of course that slows the coffee drinking pace down for me or I would spill most of it trying to give him his pets and hugs. I went down and turned the desktop computer on in my office, It's about a 4 year old Dell Dimension, oh no I got the dreaded blue screen, for those of you who haven't seen it, it says something to the effect that Windows XP has been shut down due to some problem, and if you added any new hardware to remove it, Blah, blah blah. Well I hadn't added any and once before I had this happen on my old computer and it was the kiss of death for the hard drive.
I went back up stairs trying to decide if I should make funeral arrangements for the computer and planning a trip to the computer store to see what would be cheaper, replacing the hard drive or the computer with a used one. I wanted to wait till we hit the road before investing in a brand new laptop for Donna.
I also fired the laptop up upstairs and while I was sulking I checked some blogs and debated sending a help e-mail to RICK in British Columbia. Although if he had a window facing the Midwest USA open he would have probably heard my grumbling and cussing.
I then busied myself with little things around the house till about 09:00am when I thought I would go down and try it again, nope still the same blue screen, so I figured why not nothing to lose I have an external backup drive I can get my perishable stuff off, so I decided to try and see if I could get it working. I took the Dell recovery disk out and put it in and turned it on and it found the dvd drive and I got a "hit any key to boot from cd" this took me to of all things a C:\ dos prompt. Remember those, I don't think I have seen one in ten years, but going back into the eighties when I worked for a short time part time for Computer City. I typed in CHKDSK sure enough it launched into a check of drive C:\ and found and corrected several errors. It also told me I had no bootcfg files. I typed in bootcfg /rebuild and I was amazed to see it adding files to rebuild my corrupted boot files. When it was done I shut it down and restarted it without the recovery cd in the dvd drive and it worked it's way to my desktop and I was back in the desktop business, I guess XP has backward technology because what I did is light years old.
I got an e-mail from Paul & Helen Tempesta, Jodie & Coco's  Dad & Mom, they have taken in a yellow Lab female named Sandy and nine 5 day old puppies from a Lab Rescue shelter to raise until they are old enough to find homes for them. What great folks, they did the same thing last year, by the way Jodie & Coco are both rescues and all are getting along fine. Thank God for people with their love of animals to open there home, let alone a lot of work so that these fine animals will have another chance in life,  Kudo's all around..Look at their site for pictures and the story of their new pups. Better yet I'll post a picture for you. 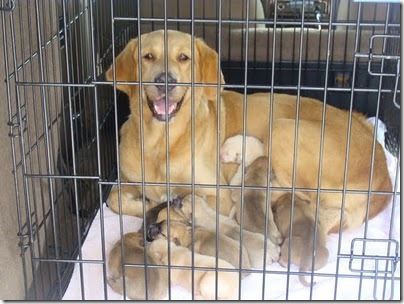 Sandy, the proud Mom. Look at that light colored yellow pup trying to get to the first feeding position, that would be my first choice as a puppy.
I remember when I was in High School my Grandfather would say surround yourself with good people, people you would like to be like and who your parents would approve of. As I raised my boys I would tell them the same thing and Donna & I tried to choose friends in such a way, I remember her telling a friend to leave a party we were having because she wanted to smoke a joint, The reason I have brought this up is I have noticed that in the blogging family just about everyone we have met or corresponded with have turned out to be Good People, whether from the USA, Canada or Mexico, Blogging Rv'ers seem to go out of their way to help others and yes animals too. I am really happy to have such friends in my life. it's a tough act to follow but I hope I can live up to this description myself.
Ah, I saved money, and had a good day so far, so maybe I better not push my luck, all of you be safe out there, Sam & Donna...
Posted by Sam&Donna Weibel at 12:12 PM