I am up at 05:30am just poured my coffee, and I decided to start a post before I start my preparations for departure for home, I want to flush my fresh water tank one more time, I did it when we came back from Ohio, so far this trip I have no odor,but I installed a valve to make it easy to empty the fresh water tank so I will empty it and flush it out again.

Judy with Travels with Emma had a question about my Dinette table, she asked if I had a jukebox on it. Well yes in a way. I found an old replica of the juke box that used to be in the booth’s at almost all Diner’s years ago. It is in reality an FM-Cassette player, but it looks exactly like those found above. Several years back Donna & I went to the St Louis Union Station, which had been converted to a shopping mall. There was a Nostalgia Shop going out of business and I saw that Juke Box replica and had to have it for the dinette, got a good deal on it since they were marked down. 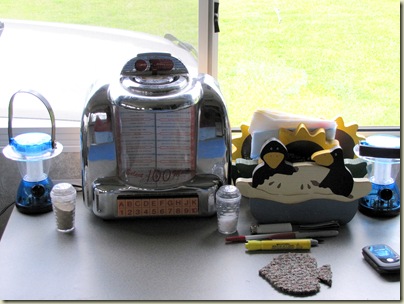 Do you find yourself leaving notes to yourself on the frig. Since the frig isn’t metal I put some magnetic clips over the stove. 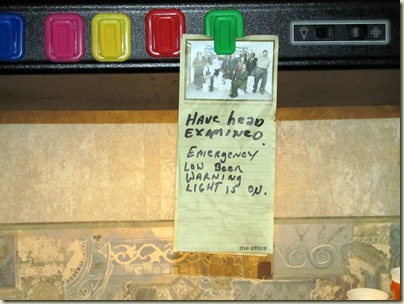 Also I think most of the ladies worst fears are what the trailer will look like after 5 days of the man of the house batching it, so I decided to show what it looks like before I bring it home, and yes I scrubbed the bathroom… 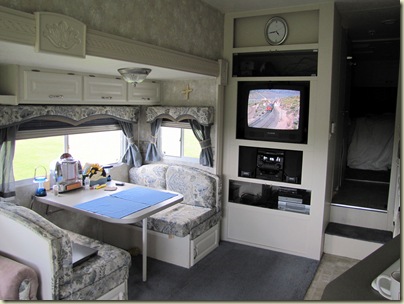 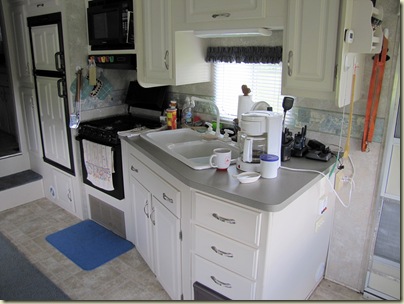 Also while I was at the Burlinton IA Depot yesterday I saw a neat poster that reminded me of Jodie, Rigg’s Yellow Lab girlfriend from FLA. Aren’t Lab’s so intelligent looking, Hey Paul show this to Jodie. She sure would make a pretty cop. 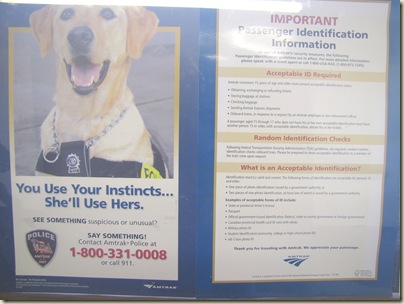 Here is another shot of the Southwest Chief, Amtrak’s version of the old Super Chief, I shot it hand held at 100mm telephoto across the bean field behind the trailer, can’t believe how sharp it is. 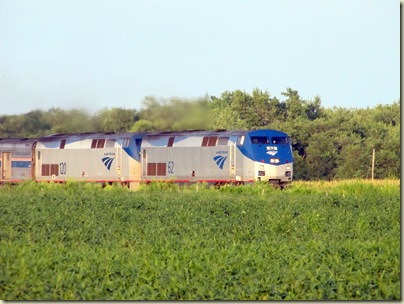 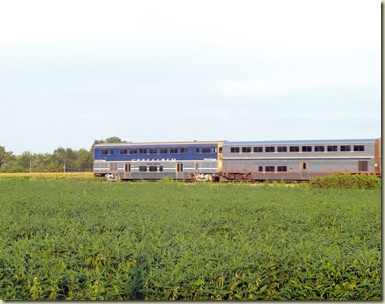 The train had about 9 cars but was traveling at the prescribed 79 mph so you get the front two and the back two. Seems like the distance magnifies the speed as this train was only in the viewfinder for second’s. What do you think AL?

Had a nice trip home a sunny drive and arrived at the house about noon, put the trailer on it’s pad and back on life support. Then went in to a rousing welcome from Rigg’s, He sure missed his Dad, As I finish this up he is pressing against me in the chair vying for attention. Had a great week. Be safe out there. Sam& Donna…