Another beautiful day started at 04:30am with coffee with Donna, then off she went to work, Andy has been laid off due to no work this week, so he is home. I decided on a couple of small projects, one a mod to the pickup, I wanted to put a 12 volt outlet in the back where the trailer plug is so I can plug my 12 volt compressor in when I want to fill water toys and mattresses when the kids tent camp with us. it also come in handy when video taping trains I can run the camcorder off the 12 volt adapter and not use battery power.  The other  project I have been thinking of is I had a six foot length of PVC pipe in the garage and I noticed the bumper square in the back of the trailer is getting rust inside from the sewer pipe and the sewer hose is getting harder to get in and out and it look like there is a pinhole in it from pulling it so hard. I decided to make a hose carrier out of the PVC pipe so this morning I went to Lowes and got a cap for one end and a clean out threaded plug and female adapter for the other. I then made I box to hole the pipe in while I painted it and I am going to attach it to the bumper square with two long hose clamps. The inside of the PVC is larger than the square bumper and wont rust, so this should solve my problem. 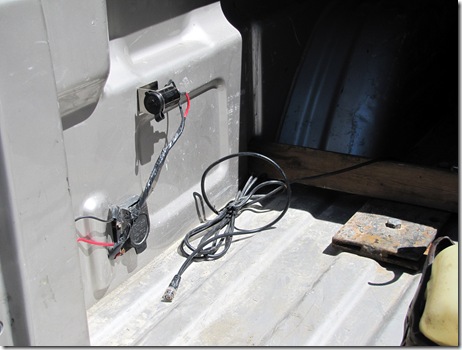 12 volt socket, I ran an FM Antenna Cable with a BNC connector for my scanner so I can plug the scanner in back here also. 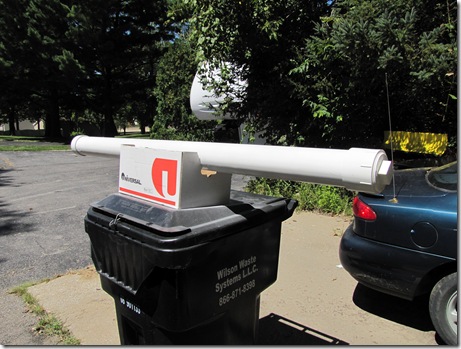 I may have to wait until tomorrow to mount the pipe on the trailer as I want the paint to be completely dry so I will post a picture of the completed mod when it is done.

Rod from Retired Rod left me a comment yesterday about a photo I posted of a jet that later crashed and we rescued the pilot from the ocean. He said that that fellow probably remembered me and was curious about if he was still with us living souls, and how many of his future family members were here because of that. I have always been embarrassed when I talk about things like that because truthfully maybe to some it sounds like heroic actions, but the truth it we were young and highly trained to do that job and it was just a great job for a young guy to have, it was like waiting to go to bat in baseball and hoping for a home run. nobody hoped the other guy would crash but you always knew that that might happen and like I said it was just an exciting job and also scary a lot of times. It was the same in my career in Law enforcement many many boring days separated by moments of sheer fear and adrenaline when something did happen, and thank God most of the time your training and practice carried you through. I must say I have always believed that each and every one of us has been placed on this earth and life with a purpose by God. Who knows what it is, in my life I have been fortunate enough to have been involved in many situations where a life threatening situation turned out great and the person/s survived to fight or live another day. I would be less than honest if I said I didn't have a good feeling of a job well done when I was finished with those things. I really have been curious to know what my purpose was or is, but we all know that is something only God knows and maybe he will share it with us in the hereafter. Thanks Rod for making me think again and maybe someday I will find out the answer to you question, who knows that LCDR may be a retired Rv'r someplace.

The more I sit here and think about the sewer hose mod, I am thinking maybe I could mount it to the pvc drain pipes on the side of the trailer where the dump valves are located, I could use the same clamps and then all the pipes would be in one place. Anybody got any idea's.

Well that's about the limit for this brain for now,I have to think about dinner for one tonight, Be safe out there. Sam & Donna.

Posted by Sam&Donna Weibel at 2:22 PM