Well today started with a little cooler weather, it was damp and cloudy and 65 degrees at 04:30am. it may top out at only 90 today which will be a relief from the last week of 100 temps, Donna went to work along with Andy, I waited till the stores opened and then left to pick up Donna' prescription at Walgreen's, then I went to Payless Shoes and got a pair of moccasins and a pair of good walking shoes for me, then it was off to the Hobby Shop for a couple of Train magazines. On the way back I stopped at a place that makes signs and got a price on some stick on lettering for the back window of the 5th wheel that will give my blog site.

Got home about 12:30 pm and decided unless I can think of something else that I was finished for the day, and I didn't have any other projects in mind it is right at 86 degrees now at 01:00pm so it is definitely cooler than before.

Donna is excited about Paul & Helen and Jodie & Coco's upcoming visit, I think most blogger's share that excitement of meeting new friend's and fellow blogger's. I hope they get here on Saturday when Donna is off during the day.

I got a comment From  BOB who stated that even where he lives in Minnesota they are experiencing severe hot weather, must be a freak year, first record cold and snow and now record heat and heat indexes. I wonder what will be next, a plague of locust's knowing our luck. Hang in there Bob maybe you can cash in on that idea of storing the heat for those MI. winters.

As you can see I haven't had the camera out to take any new pictures for a few days . How about dipping into the archive for some oldies.

Here are a couple of shots from 1965 when I was assigned to Det 62 on the USS Independence an attack carrier. She  has been retired and scrapped. I'm retired too, wonder when I'll be scrapped. 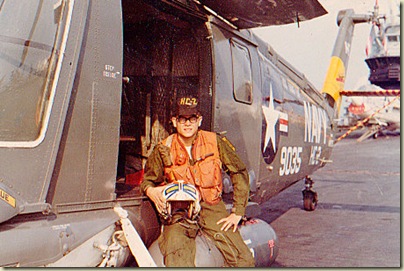 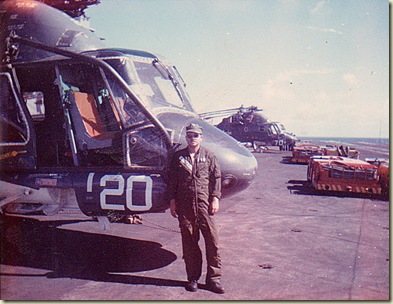 This was taken just before the Air Wing flew aboard off of Norfolk Virginia, from  NAS Oceana. We had flown aboard as the ship left the dock and was still in the channel on Chesapeake Bay, notice besides our three helo's there are no other aircraft aboard yet, that would soon change as we were getting ready to launch to be airborne while they recovered the air group and we headed across the Atlantic to England. 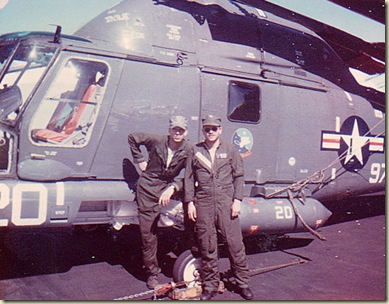 This young man on the left and I went to high school together his name was Barry Waluda, He had just returned from Viet Nam and was assigned to Det 62, imagine my surprise when they put him on my crew. I was getting to be an old salt here. Wonder if he is still with us. Haven't seen him since I left the Squadron.

All of these pictures were taken in the summer in lower latitudes like off the coast of Virginia, when you headed north in the Atlantic you went quickly into full body exposure suits as the water temp never got above 40 degree's all year round. I can't imagine being that trim and slim, I was 160lbs back then. My Mom said half of that was beer. Sure was a kickbutt time to be in aviation and I sure enjoyed it. I still wear my HC-2 Squadron ball caps. I also still have my flight boots. and one flight suit that I will never fit in again, maybe my grandson Adam will someday.

Well that's it for today.All of you out there, be safe and enjoy life while you can. Were counting the days to fulltiming and seeing this great country and the great one to our north. Sam & Donna..

Posted by Sam&Donna Weibel at 2:11 PM