Up at the usual 04:30am, had coffee with Donna and then went down to my office to catch up on blogs, I decided since we are supposed to have a sunny weekend with a chance for isolated showers on Saturday, I would take the trailer to the Lake this morning and have a good chance at one of my favorite spots at the campground, so since it has all but a few food items already stocked at 08:00am I hitched up and after a short stop at Shop & Save to get soda & beer and donuts for Adam, I headed to the Lake Sherwood, When I got there one of the guys I hired when I was Chief was working the desk, Ed filled me in on what was new, and said far as he knew the campground was still empty from last weekend. I paid my fee and went on in and low and behold I had my choice of any spot as I was the first one there. 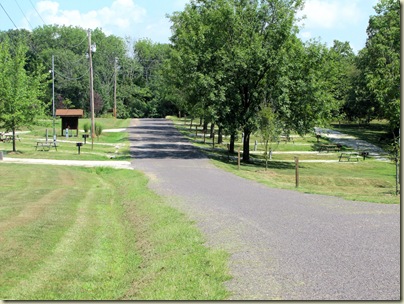 I decided on a back-in at the corner in spot 16 in the rear right next to where I stayed in May for Memorial Day Weekend, This is my favorite spot but was already taken in May so then I stayed in spot 15, I like it because of the shade and the fire ring is right next to the rear corner of the sight, farther up the road there are pull, thru’s spots 1-6 and when I worked here I would always stay in spot 3 because it was right in the middle of the campground. 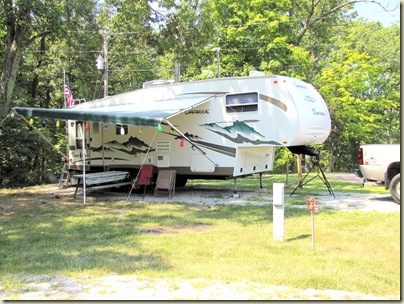 When I was leaving I noticed water dripping from under the front of the trailer where the hoses connect to outside water, When I opened up the storage door on that side I noticed it was wet and that a pex fitting had come loose running from where the outside water hose connection comes in and tees into the water lines. I cut the end off of it and refit it and tightened the pex fitting and connected it and there were no leaks. Good thing I had noticed it before connecting to the hydrant or I would have filled the compartment with water. As it is I opened the other side and put a fan inside and within an hour it was dry inside, I will let it run all day just to be safe.

I just realized I forgot Adam’s bike and so I will be heading back to the house to pick it up, Having a 9 years old almost(2 weeks till his birthday) without a bike is probably against some law. I will be picking up the new third grader tomorrow at 3:30pm when he gets out of school and then heading back to the Lake with him, Tonight and tomorrow it will be Grandpa’s time alone.

That’s about it for now, be safe out there. Sam & Donna…

Posted by Sam&Donna Weibel at 3:11 PM