Was up early and had coffee, spent some time reading the blogs, Then some laundry. I don’t think I mentioned it before but the City of Dardenne Prairie just completed a large park behind the City Hall complete with some elaborate playground equipment and rest rooms, a pavilion and a little gazebo bandstand.

Today after lunch I took Adam & Nicole over for about an hour, they had a blast, a lot of other kids to play with and just a really neat place to play, and it is a block from our house.

Here they are when they got up this morning. 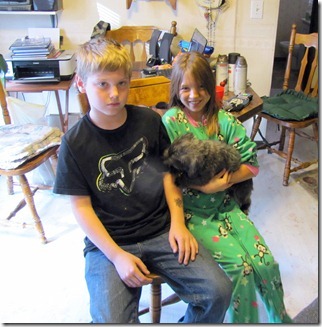 It doesn’t show in the picture but Nicole was wearing the neatest jammies with the feet in them.

Later they got into a game of tag and made Rigg’s “it”then they would run and hide and Rigg’s would find one of them and then they were “it’ until they caught someone else. I’m surprised they didn’t catch hell from Grandma or the parents since the noise level got pretty loud, but they were having fun, that’s all that counts.

Donna has a shift tonight at the restaurant and Adam’s Mom is picking him up before supper. But it has been a fun Saturday here at the Weeb Ranch.

After coming back from the park Grandpa is taking it easy.

I hope everyone’s weekend is going fine like ours. Be safe out there.  Sam & Donna…

Posted by Sam&Donna Weibel at 1:28 PM