We were up at 04:30AM and had our coffee, Donna has to go in a half day at the truck company and then tonight at the restaurant.

I decided since Rural King opened on Black Friday at 06:00AM I would leave the house at 05:15AM in case there were a few in line. Surely the real shoppers would be at Best Buys, and Wal-Mart or K-Mart. BURRPP…. wrong as I drove onto the lot there was already a line of about 60 people. I had no other choice but get out in the cold and join the other fools. The whole time I was thinking, they only showed 2 of those generators in stock surely I can’t be so lucky as to have no buddy else wanting one in this crowd. Finally they unlocked the door and I did an end run around the middle aisle and got directly to the  power driven aisle, and there they were like an oasis in the dessert Two 3500E electric start generators just as pretty as you please. One was a floor model and the other was in the box, so I loaded the box onto a cart and then I still had to buy a power cord adapter for the twist lock socket and a couple quarts of oil. Went to check out which was another 30 minute line and madhouse, The generator, which started out at $399, ended up being $319, after the Black Friday 20% discount. The cord was $21, and the oil about $6. with tax it came to $371.00. Still less than the $399 I started at and that was what the 2000 watt model was going for when I looked at them last summer. Here’s the new baby. New in the box. 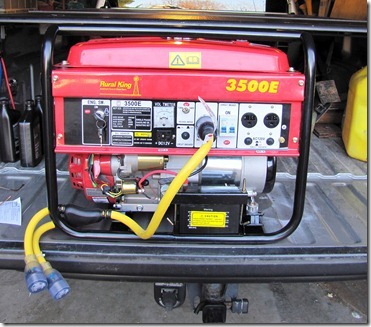 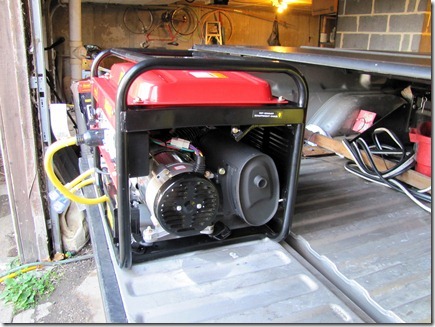 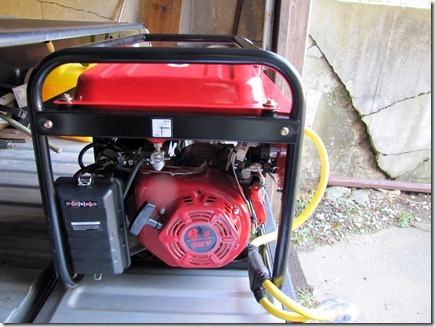 This afternoon I will fill it with oil, put some gas in it and hitch up the battery and charge it. Then give it a test run. What’s nice is the fuel shut off, you can shut the valve and run it out of fuel in the lines and the carb will stay clean and varnish free. A few ounces of Sta-Bil in the gas tank and it will be ready to go just by turning on the fuel valve.

Will I ever do Black Friday Morning again, NAW, can’t be lucky twice in that game.

Donna and I did our Thanksgiving Dinner at Hometown Buffet in O’Fallon, we got there at 04:00PM and it was a madhouse to with about a 30 minute line already. Doesn’t anybody cook at home any more, the place was loaded with young families. If it wasn’t just the two of us we would have cooked a turkey at home, since it was the only place in town open we had to wait it out in line, but I will say the food was good and hot and there was plenty of it.

Well I’ll get this out for posting. WE hope Y’all had a great holiday and enjoy your long weekend. Rigg’s is bugging for me to go in on the bed and take a nap with him, he missed his morning nap after Donna leaves where we get an hour before Nicole goes to school.

Posted by Sam&Donna Weibel at 8:54 AM