Yesterday ( Tuesday) we got up at about 06:00am, by 07:30am Adam headed out for his first bike ride, he came back for breakfast and headed back out, We watched our neighbors Bev& Paul hitch up to their 5th wheel, they had a Cougar, that was painted exactly like our Coachman, the inside was furnished similarly and the floor plan was the same, except for the decals and some minor window differences you would have  thought they were the same trailer. After handshakes and hugs and of course the dog’s said goodbye with licks and kisses, they left with promise’s to keep in touch, About 11:00am Adam was back and saying Grandma all the guys are going swimming, can I go, so he changed and Grandma went up to make sure there were other adults there. Sam was waiting for a ladder to put a piece of sealer tape (eternabond) on a caulk seam that had come loose. Donna came back satisfied that another Grandpa had assumed the duties of Officer in Charge. 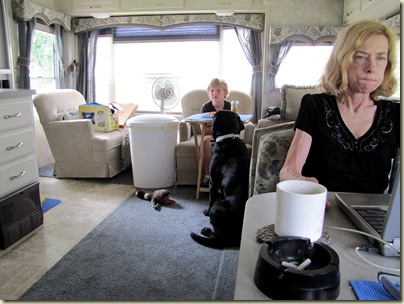 Some serious laptop concentration while Rigg’s wait’s to see if Adam is going to drop anything.
We had decided to visit Donna’s brother Pat again in the afternoon, he had an early Doctor’s appointment so we told him we would be back over around 03:00PM.
Adams was still swimming at 02:00PM so Donna went up to get him at the pool. We all jumped in the truck and allowed Rigg’s to stay alone for the first time in the trailer, first Sam put the night shades down so he couldn’t see out side, and then we doggie proofed the trailer so there wasn’t anything he could reach and steal, Donna then put the TV on so he would think we were home.
It’s just about an hour to Pat’s house and of course after a couple of hours of hard swimming Adam fell asleep as soon as the truck was rolling at highway speeds.
We had planned on a couple of relaxing hours of conversation, and then going out to dinner, Pat had good news from his Doctor, but was also told his procedure had been the most difficult of it’s kind the Doctor had ever performed and that he would be sore for several more weeks, but the overall prognosis is excellent. 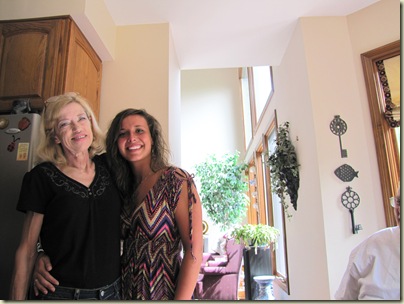 Donna and her Grand Niece Sidney,what a beautiful young Lady, (18yrs old). At least good looks runs in the female side of the Family.
About 05:00PM we headed over to the Olive Garden Restaurant, just a short drive from Pat’s house, we had a wonderful Dinner spending a long time just relaxing. Thanks' Pat & Kathy for a wonderful meal.. 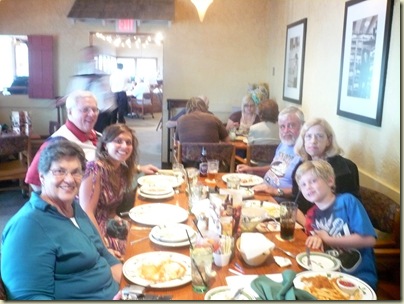 Our Dinner at the Olive Garden.
All good things come to an end and Pat was tiring so we left for the campground around 8:00PM. We stopped at an IGA store on the way back in Aurora IN. to pick up a couple of grocery items. and then got back home. Rigg’s was glad to see us and we were happy to see he  had been a good boy and not gotten into anything. We had a pretty good storm when we got home, Rigg’s didn’t seem to notice it though and proceeded to occupy his night with chewing up his new duckey that he got before we left. We regret to inform you that Ducky succumbed to his injuries later in the evening, with no head no legs, no stuffing, and no squeaker, he is just a shell of his old self. 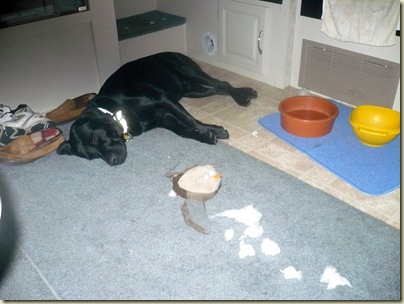 Takes a lot out of a guy to chew up a Duckey toy. 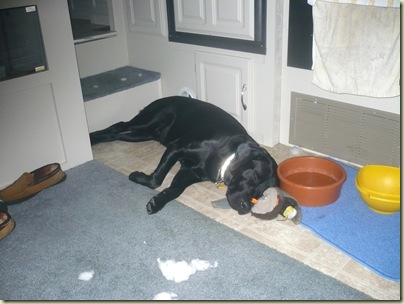 I’ll just use Duckey as a pillow. 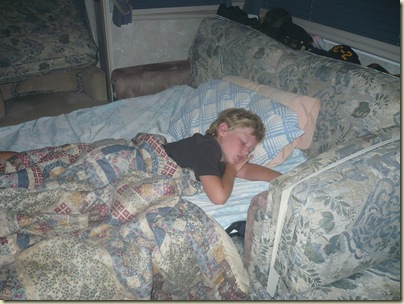 The end of another great vacation day..
The plan for today, is to swim awhile and then go to the Newport Aquarium in Cincinnati. We will post tomorrow on this visit, be safe out there, Sam & Donna.

Posted by Sam&Donna Weibel at 9:08 AM