When I got up at 05:00AM instead of the 6 inches of snow I was expecting to find, we just had a light dusting less than an inch, About 08:00AM Adam's Mom called and said she was leaving Warrenton to come and pick him up as it had just started to flurry again, It is about a 25 mile drive on the interstate, well it seemed like as soon as I hung up and started getting Adam to pack his bag and get his stuff together, it started to really snow, by the time Shana arrived we had about another inch and it didn't show any sign of slowing, so they left to head back and called about an hour later and said they had just made it home and the roads were snow covered and bad. There won't be any school out there tomorrow so I have to wonder why he just didn't stay and I could have drove him home later in the week, in a 4 wheel drive truck. Anyway just something else to worry about.

Donna had to work at the restaurant from 10 AM to 05:00PM , It's been snowing all day and we have several more inches of snow so when it stops John Deere and I have a date. 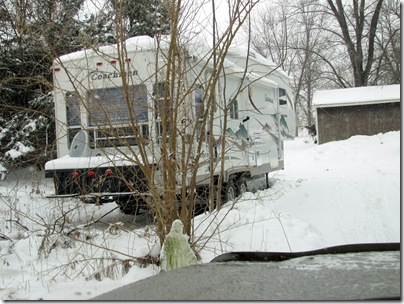 I backed the truck out of the garage and shot the trailer. The poor Blessed Mother is frozen. 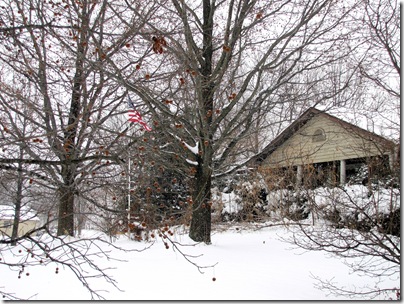 For some reason the camera didn't stop the snow flakes, but believe me they are falling.You can see that plowing is again needed.

I was going to go to the store and get the fixins for some homemade Grandma Genett meatballs, but that can wait until tomorrow and I am thawing some cube steaks and I'll have to try boiling some potatoes, without RICK"S special Irish instructions.

I keep having this dream that my son will walk in and say "hey Dad, I'll plow for you it's pretty cold out there. "

Will someone just hit me in the back of the head with a ball peen hammer so I will regain my senses, and just put my Carhart's on and go on down and fire John up.

Now with Adam gone even the dog's are quiet, I guess the noise of the tractor will liven things up for a little while.

For all you guys like my friends in California & Arizona that are enjoying the pools and hot tubs, all I can say is a hot shower after plowing is just as therapeutic, and it also thaws out frozen hands and feet so they don't hurt as much. Be safe out there. Sam & Donna.